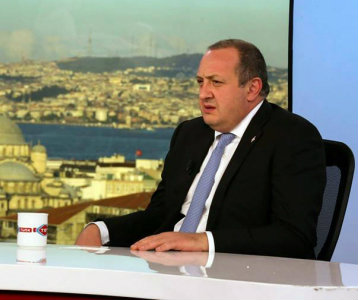 TBILISI, DFWatch–Georgian President Giorgi Margvelashvili appeared on the Turkish TV Monday, explaining his country’s policy toward two breakaway regions that have been controlled by Russia since the war in 2008.

Georgian territorial integrity will be restored, he said, but it will take time and happen by peaceful means.

“I think that we are sending a good message to residents of Sokhumi and Tskhinvali that our future is a united Georgia which we can build through joint effort,” Margvelashvili said on Turkey’s public broadcaster.

Outlining the strategy, the president explained that people in Abkhazia in South Ossetia will be offered closer integration with the European Union. In clear terms, this means business development and visa liberalization.

Georgia signed a free trade agreement with the EU in June, and part of the agreement is already in force. A visa action plan is also underway which may lead to visa-free travel to the Schengen area for Georgian citizens, like Moldovans achieved this year

After the war in 2008, Russian troops remained inside both regions. Control of the expanded and disputed border is handled by soldiers of the Russian security service, FSB, whose strict enforcement frequently lands local Georgians in Tskhinvali prison cells for illegally crossing the border.

The Russian ‘occupation’ is something Russia and Georgia will never agree on, Margvelashvili said, but stressed that there should be dialogue and cooperation.

He pointed to the way Georgian products are again exported to Russia as the kind of cooperation that is beneficial for both sides. But also cultural cooperation and personal relations between Russians and Georgians should be enhanced.

The president said that at first existing tension between Russia and Georgia should be eased, and only then can the difficult issue of Abkhazia and South Ossetia be discussed.

While talking about current events in Ukraine, Margvelashvili warned Russia that it is dangerous to have small uncontrolled regions at its borders.