March 8 rally in Tbilisi calls for more women in politics

March 8 rally in Tbilisi calls for more women in politics 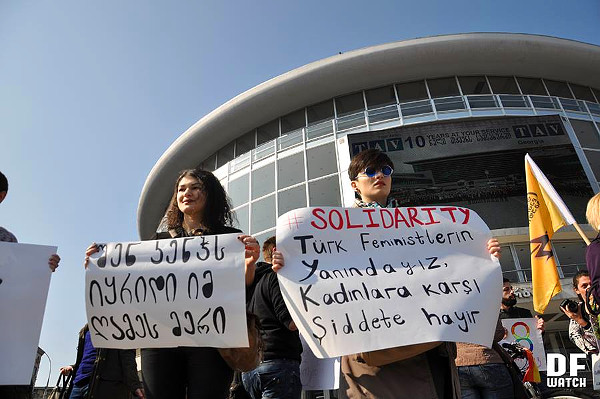 TBILISI, DFWatch–Labour rights and women’s political participation were the central issues during the International Women’s Day rally in Tbilisi.

The rally included speeches and performances organised by a coalition of various feminist, LGBT, and left-wing movements.

Activists marched from Tbilisi Concert Hall to the parliament building on Rustaveli Avenue, handing out their manifestos to passers-by.

This year’s rally made explicit references to the issue of labour rights in the country in the context of recent miners’ strikes in Tkibuli, which were supported by a variety of feminist and LGBT groups.

“We’re marking the International Working Women’s Day to draw more attention to the fact that while general working conditions in Georgia are bad, women belong to the most vulnerable group; especially marginalised women such as sex workers, single mothers, women with a disability, or female miners. We’re asking the state to improve their labour conditions by means of various mechanisms and events,” Eka Imerlishvili from the Independent Group of Feminists (IGF) told journalists.

“My poster is an expression of solidarity with Turkish feminists who are the victims of [Turkey’s president] Erdoğan’s regime. They were forbidden from demonstrating today due to a ‘terrorist threat’. They still decided to stage a protest, although it was violently dispersed with use of tear gas. I stand solidary with our Turkish fellow fighters,” Miranda Gagua from IGF told DF Watch. 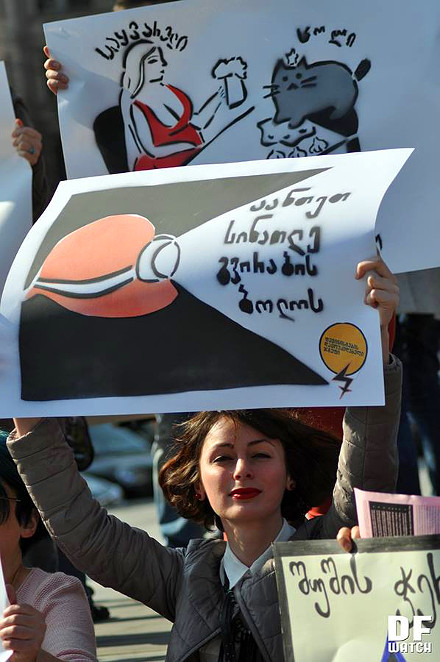 In front of the parliament building, organizers had placed boxes with names and pictures of parliament members, both men and women, and participants were invited to write a letter and send it to the parliamentarians by dropping them into the boxes. Baia Pataraia, one of the organizers, called on people to demand from MPs to support a quota system for female parliamentarians.

Several female activists made speeches, each of which began with the phrase ‘Can you hear my voice?’

Each of the activists ended her speech with a call for ‘more women in politics’.

Maia Chitaia, a single mother: “My interests are being represented by men, to whom my experiences as a women and as a mother are alien. These politicians think that women’s domestic labour is their natural activity, which is one of the reasons why it remains invisible. As a reward, they offer titles such as “mother hero”, we also have Mother’s Day. I don’t need these titles and I don’t need the Mother’s Day. I want the state to support us like it happens in other democratic countries where women have proper political representation, where single mothers are exempted from tax, where there is a functioning alimony system, where they have effective regulations for female heirs. Our state doesn’t pay attention to us. The laws on alimony and inheritance are as dead as always. This happens because there are men in the Parliament, to whom my experience is alien. In order for my voice to be heard and for my interests to be protected, I need to be represented by women. I want more women in the Parliament.”

Natia Gvianishvili, a lesbian woman and a feminist activist: “Since my childhood, I didn’t hear anything good about people of my like. We also hear today that there is no place for people like us in this country. Every day they kill us, beat us, reject us, threw us out of our houses — people influenced by hatred coming from politicians and religious figures, including our family members. No-one is being punished for it. On 17 May 2013 [International Day Against Homophobia and Transphobia], I could have lost my life and no-one was punished for it. Politicians remember about us when they need a scapegoat for their own incompetence and indifference to real social problems. From among 150, only 3 members of parliament protects our interests openly and without a compromise. All of them are women. Women can and are not afraid to take our voice to places where there is silence, where issues which are important for us are being decided without us. That’s why we need more women in politics.”

The event ended with a small concert by having Ketato and Erekle Deisadze, local singers, cheering up the crowd. Some of the participants held large LGBT flags and calls were heard ‘no to homophobia.’ Demonstration was joined by number of foreigners passing by, who shared the idea of the protesters.

DF Watch publishes the full text of the manifesto, which was being distributed during the rally.

On March 8th, the International Women’s Day, we march in protest against the horrendous and discriminatory labour conditions in the country. The dreadful labour conditions are manifested in systemic and continuous violations, among which the most problematic are: irregular working hours, low and inadequate remuneration, life and health threatening working conditions and employers’ diminishing and humiliating treatment of employees. We want to emphasize the fact that these practices affect workingwomen more so as they, besides being subjected to the malice practices as listed above, also face other larger challenges just merely because they are women. They:

Lesbian and bisexual women face serious problems because they are more often subjected to sexual harassment, psychological pressure, hate speech and stereotypes. Transgender women also face very specific challenges — since legal procedures on making sex change in ID cards is not prescribed, the legislative vacuum leaves these women either unemployed or forced to take on jobs not requiring personal identification documents. These jobs are low paid, scream of heavy working conditions and often are even life threatening. Employment opportunities for women with limited abilities are basically not available due to non-adapted infrastructure at workplaces as well as due to limited educational possibilities.  The government does not adequately support single mothers; herewith, state funding for kindergartens, day care centres and other similar services is decreasing. Sex workers work in a violence-ridden environment as law enforcement agencies and society as a whole is aggressive and insensitive towards them.  It is due to language barriers, and especially due to stereotypes existing against them, that the religious and ethnic minority women are often unable to fully exercise labor rights and/or appeal to courts to challenge the constraining conditions as caused by gaps in access to justice.

The signatories of the manifesto: