Many reactions to Shevardnadze’s passing away

Many reactions to Shevardnadze’s passing away

TBILISI, DFWatch–As former Georgian president Eduard Shevardnadze died on Monday, aged 86, the same day several people organized a demonstration outside his residence in Krtsanisi, Tbilisi, where he lived in his final years.

A group of several people calling themselves supporters of former president Zviad Gamsakhurdia, and say they believe Shevardnadze was in the wrong, as he came to power after Gamsakhurdia was overthrown. They believe those behind the coup in 1992 brought Shevardnadze from Moscow.

Year by year, their numbers have fallen, as they have lost support. In recent years, the group’s leader is Zviad Gamsakhurdia’s widow, Manana Archvadze, and the group sees her as the legitimate prime minister of Georgia, addressing her as such. They do not recognize any government after Gamsakhurdia and have been protesting every day, in any weather, at a certain time of day outside Shevardnadze’s residence, shouting through megaphone slogans like “Shevardnadze Judas.”

This also happened on Monday, the day Shevardnadze died. They shouted insults, which is unacceptable within Georgian customs, as it is perceived as a dishonor to insult a deceased person, not only for the deceased, but also for the family.

However, this group’s attitude toward Shevardnadze may also be seen as an expression of Georgian society’s attitude to what he did. Some think he was a successful politician and that he did much for Georgia; but others think that he is traitor and was taking orders from Russia. While he was in office, Abkhazia was lost and many people personally blame him for that. 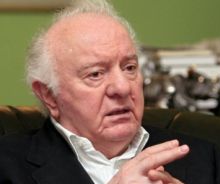 Some people think that he correctly started governing independent Georgia and managed to bring the country out of catastrophic conditions after the civil war to more or less better conditions, which is true to some degree, because when he came to power, the paramilitary organization Mkhedrioni informally running the country by robbing people and taking their property and many people were killed.

Current and former world leaders responded to Shevardnadze’s death Monday calling him a great politician. Swedish Foreign Minister Carl Bildt wrote on Twitter that he was a ‘big personality’ of our time.

“His December 1990 resignation should not be forgotten today.”

Mikheil Saakashvili, who earlier was perceived as Shevardnadze’s favorite, became his opponent in the beginning of 2000 and they had a quite tense relationship after the Rose Revolution three and a half years later. Saakashvili used to remember Shevardnadze’s government in a negative context, while Shevardnadze always criticized him in interviews after the revolution.

In his condolences Saakashvili described Shevardnadze as an ‘important figure.’

Russian President Vladimir Putin also responded to Shevardnadze’s death. Ria Novosti reports that the spokesperson of the Russian president’s administration made a statement in which Putin expressed his condolences to the family and relatives of Shevardnadze, and to the Georgian people.

Mikhail Gorbachev, the former Soviet leader, also expressed his condolences about the death of Shevardnadze. They cooperated during the collapse of the Soviet Union and it is believed that some reforms were conducted in Soviet Union as a result of the policy of the two. Most importantly, the Soviet Union agreed to let the Berlin Wall be torn down, which is perceived as the start of the new period in Europe.

PM Giorgi Margvelashvili said Shevardnadze was a distinguished politician of the twentieth century who participated in the dismantling of the Soviet system.

“He is a politician whose name is related to the fall of the walls in Europe and creating a new Europe,” he wrote, adding that Shevardnadze fulfilled a serious role in creating a new Georgia and its development towards a western course.

Gharibashvili ordered the creation of a government commission for Shevardnadze’s funeral, which will be held on Sunday, July 13. The government will organize it and cover the expenses. It is still unknown where he will be buried.

Some important facts from his biography:

1978 – Shevardnadze manages to make Georgian keep its status as official state language. This year, the Secretary General of the Soviet Union in ideology and propaganda made a decision to abolish ‘small languages’ in the Soviet Union and announce Russian as the state language. The Georgian people were against this and organized massive protests in Tbilisi to protect the language. Only Georgia, Armenia and the Baltic countries resisted this decision by the Soviet Union. Ukraine, Belarus, Azerbaijan and other republics agreed. It is believed that the fact that the protest ended peacefully and Georgian retained its status as state language is Shevardnadze’s accomplishment.

1983 – Shevardnadze makes an unpopular decision in the so-called plane guys case. Several young people hijack a plane in a sign of protest to the regime. The hijackers, who were children of the so-called Georgian intellectual elite, failed and several people died. Despite appeals to pardon the perpetrators, Shevardnadze insisted on the death penalty. http://en.wikipedia.org/wiki/Aeroflot_Flight_6833

1985 – Appointed as Foreign Affairs Minister of the Soviet Union.

1990 – Participated in negotiations of uniting Germany and it is believed that he had special merits in collapsing the Berlin wall for which he is much respected in Germany.

1990 – US Secretary of State James Baker and Shevardnadze signed an agreement about United States maritime boundary.

1992 – The Georgian National Guard overthrew the first president after independence, Gamsakhurdia, in a putsch. The coup-makers invited Shevardnadze to head a body which they created – the State Council. In the parliamentary election of 1992 Shevardnadze’s government was legitimatized. He was elected head of parliament, a post he held until 1995. He was also head of the State Defense Council, while in 1993-1995 he chaired the constitution commission. On his initiative, Georgia joined the Commonwealth of Independent States (CIS) in 1993.

1999 – Georgia became member of the Council of Europe and officially applied for NATO membership.

He was subject to three assassination attempts: in October 2, 1992, by Russian soldiers in Abkhazia, August 29, 1995, in the yard of Georgian parliament, and on February 9, 1998, on his way to his residence.