Many milk products in Georgia have misleading labeling

Many milk products in Georgia have misleading labeling 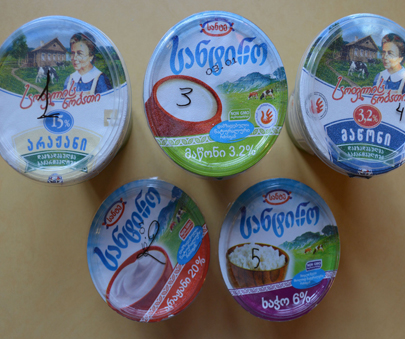 Center for Strategic Research and Development examined fifteen types of milk products, and ten of them turned out to contain vegetable fat. (for.ge.)

TBILISI, DFWatch–Food companies in Georgia are selling modified milk products with misleading labeling, according to Center for Strategic Research and Development.

The center examined fifteen types of milk products, and ten of them turned out to be modified. They contained vegetable fat, but the label said it was a milk product.

Momxmarebeli.ge (consumer.ge), which carries out examination of different products, on December 24 purchased sour cream, cottage cheese and matsoni at one shop. The package on ten of the products read that it contained vegetable fat, instead of milk fat.

On the remaining five products, the label didn’t indicate that it included vegetable fat, and they were sent to a laboratory for further examination, which concluded that they are approved milk products.

According to international standards, products which contain vegetable fat should not be sold as milk products.

Lia Todua, from Center for Strategic Research and Development, told DF Watch that the organization appealed to the government and asked to intrudoce legislation regulated the following issue.

According to international standards, she says, products where milk fat is replaced by vegetable fat cannot be sold as milk products. She says this must become a normative act and companies must indicate on the label that it is not a milk product. Also the name of the product must indicate this, not only the list of what it contains.

Todua says the consumer doesn’t usually pay attention to such lists, only the name of the product. This misleads the parents, when their children need real milk products, but not vegetable fat.

On grounds of the organization’s appeal, the government instructed the Agriculture Ministry to prepare a technical regulation about this issue.

“The government can also prepare this regulation, but for a year now it hasn’t taken any measures about the issue,” Todua continued.

She explains that parents usually buy milk products for children for the protein and fat content and it is not correct to mislead them.