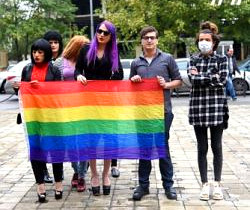 TBILISI, DFWatch–The 31-year-old suspected of viciously attacking a transgender woman in Tbilisi on October 14 was Wednesday placed in pre-trial detention.

The accused Giorgi Murjikneli’s lawyer asked for his client to be released on 1,000 lari bail, but the judge decided that the accused is a danger to the public.

The first court hearing was scheduled for December 8.

The transgender woman who was attacked is still in a serious condition after the brutal attack in the Tbilis district Ortachala during which her throat was cut.

A dozen people had gathered outside the court building during today’s hearing to protest against the violent attack.