Man shoots ex-wife, then kills himself at Tbilisi university

Man shoots ex-wife, then kills himself at Tbilisi university 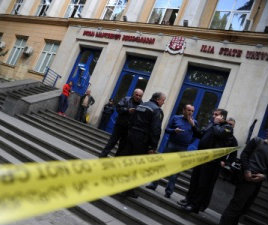 TBILISI, DFWatch–A lecturer was shot dead by her former husband at Ilia State University (ISU) in Tbilisi on Friday. The murderer committed suicide on the spot.

Maka Tsivtsivadze was holding an English lecture, when she was visited by her former husband. He called her to come outside of the classroom and then shot her in the hallway before turning the gun on himself. The woman later died at the hospital.

According to the mother of the dead woman, the ex-husband had two drug-related convictions, and was released in a mass amnesty which took effect in early 2013.

The victim’s mother told the news agency Interpressnews that her former son-in-law was constantly harassing her daughter. She claimed that her daughter went to the police to file complaints about the harassment. But the police failed to provide protection, the mother said, and on the day of the murder, she accompanied her daughter to university out of fear for her safety.

The victim’s father told Interpressnews that the couple had separated after the relationship went bad, but then the husband had tried to reconcile. It is not entirely clear whether the couple had formally divorced.

The Ministry of Internal Affairs (MIA) confirmed that Tsivtsivadze went to the police twice, on September 22 and 26. MIA said, the first time she went to the police station in Rustavi, a town south of Tbilisi, and reported that her husband, or former husband, was using physical violence against her. She asked police to either make him stop or arrest him.

The husband then apologized and promised to stop. But in four days Tsivtsivadze went to the police again, this time at Didube police station, because the killer started sending her threatening text messages. On September 29, he was called to the police station and warned to stop the harassment or face legal consequences.

Friday’s murder-suicide has caused a debate among Georgians about domestic violence and how to provide protection for victims.

Media have recently reported many cases of brutal violence against women by their current or former husbands or other close relatives. A young woman was killed by her ex-husband, a police officer, in Zestaponi, a jealous man killed his pregnant wife in a village near Kobuleti, an underage girl killed herself in Kakheti because she was being forced to get married, and a woman committed suicide in Lambalo because an angry mob harassed her due to alleged adultery.

According to Imedi TV there have been about 20 cases of grave domestic violence so far this year.

According to Public Defender Ucha Nanuashvili, this latest tragedy shows that there are serious problems when it comes to domestic violence, because the legal response is often inadequate. It’s not only necessary to examine this particular case, but there should also be changes in public policy in order to tackle the problem, Nanuashvili said, including introducing tougher legislation and providing training for the police.

On the day of the tragedy, parliament unanimously approved changes to the law on combating domestic violence, which is meant to provide more protection for victims.