Man sets himself on fire at parliament

Man sets himself on fire at parliament 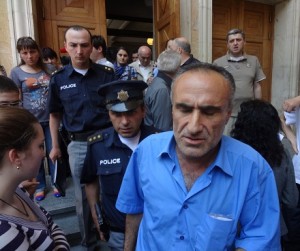 Personnel at parliament put out the fire, and police arrested Giorgi Chikhladze. He says he did it because of serious health problems which the government isn't helping him with.

TBILISI, DFWatch – A man Thursday set himself on fire at the parliament building because the government hasn’t helped him.

Parliament employees managed to put out the fire. Then police and firemen arrived and arrested Giorgi Chikhladze. He did not resist arrest.

Chikhladze, says he was unfairly arrested, and for seven years have not been able to get justice anywhere. His health condition seriously deteriorated in jail and today he suffers from several illnesses. He doesn’t have enough money for medical treatment, so he has several times appealed to the government and others for help, but no-one has reacted to his appeals.

Giorgi Chikhladze says that’s why he put himself on fire, because he cannot see a way out of this situation. He adds that he did not mean to damage the parliament building.

But an employee at the parliament who witnessed the drama told a different version. Khatuna Uznadze, head of Parliament’s Department of Proceedings, says that Chikhladze without any warning poured an inflammable liquid on documents in the citizens’ reception and put it on fire.

“Citizen Giorgi Chikhladze applied in December to us requesting to finance operation. Parliament reacted and transferred his application to the Ministry of Labor, Health and Social Affairs. Today this citizen appeared and without explanation he dropped documents, which he set on fire. There were two employees at the reception of citizens. Fire spread over the table. He only told us ‘we should burn, we should burn to ashes.”