Man doused himself in gasoline in Tbilisi

Man doused himself in gasoline in Tbilisi 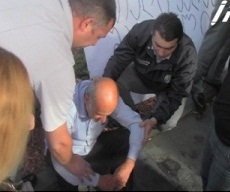 Frustration with a dire economic situation drove the man to attempt to set himself on fire. (Interpressnews.)

TBILISI, DFWatch–A man attempted to set himself on fire at a protest rally in front of Tbilisi City Hall on Monday.

Pouring gasoline over himself, the man said he has nothing in this world and there is no point in living.

Protesters and police managed to stop him and took away his matches and jacket, which was soaked in gasoline.

The rally was organized by socially vulnerable, members of the veteran’s union, refugees and IDPs as well as people hurt by mortgage loans. They demanded that city hall sets up an apartment fund to take care of the homeless people.

Protesters brought a funeral bouquet with a portrait of Tbilisi Mayor Gigi Ugulava, as well as broomsticks with roses attached. Roses are the symbol of the Rose Revolution and the National Movement party, while broomsticks symbolize the prison abuse scandal, which shocked Georgians shortly before the parliamentary election in 2012, as the public learnt about torture and mistreatment methods at Georgian prisons.

A mourning song was playing at the rally as a message to the mayor that he is doing nothing for his city, organizers explained.

Mamuka Katsarava, head of Tbilisi City Hall’s social service and cultural department, says that the issue of creating an apartment fund can only be decided on the level of legislation. He sayd the form of protest seen Monday is unacceptable and that city hall will not fulfill their demands. He said the country has a policy of social protection to support socially vulnarable families.

Katsarava said Georgia doesn’t have any apartment funds, but he think parliament should work on this issue.

“We will do everything in order to identify the most vulnerable families.” he said. “We will try to assist them individually, but we won’t encourage this form of protest in this country.”