Man dies in avalanche in Svaneti

Man dies in avalanche in Svaneti 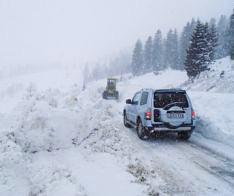 TBILISI, DFWatch–A man died in an avalanche in Svaneti, in northwestern Georgia on Wednesday.

The accident happened in Khaishi on the road between Jvari and Mestia. Rustavi 2 reported that the victim was a local minibus driver who had stopped his vehicle to look at the pileup of snow from a previous avalanche.

Another avalanche occurred, and he was caught in it.

His body was taken to Khaishi and will be sent to Kutaisi for an autopsy.

An investigation has been launched pursuant to article 116 of the Criminal Code about death due to negligence.

The road department said the road section between Jvari and Khaishi is closed for all traffic due to intensive snowfall and danger of avalanche.