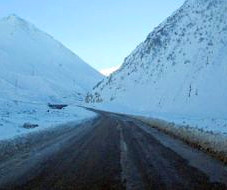 TBILISI, DFWatch–From Monday morning, heavy vehicles were again allowed to drive the S-3 road which runs from Mtskheta north of Tbilisi, into the Caucasus mountains and to the Russian border.

But between Gudauri and Kobi, only vehicles fitted with snow chains are allowed to drive, it is not allowed to make stops and anti-avalanche tunnels must be used.

The SH-17 road between Tkibuli and Ambrolauri has been cleared of snow and is open to all types of vehicles.

It was prohibited for trailers and other heavy vehicles to drive on the section between Tkibuli and a few kilometers north of Nikortsminda the last few days, but this restriction has now been lifted after the road clearance work. 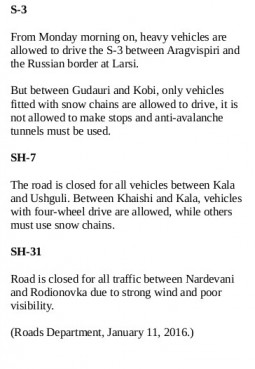 The intense rain continues in Svaneti and restrictions remain in place along the SH-7. All kinds of vehicles are prohibited from driving between Kala and Ushguli, and on the section between Khaishi and Kala, vehicles without four-wheel drive must use snow chains.

In the south of Georgia, the SH-31 remains closed for all traffic between Nardevani and Rodionovka near Ninotsminda due to strong wind and poor visibility. 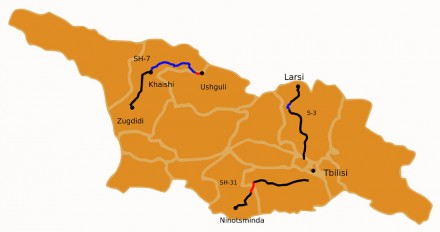 Sections in red are completely closed, while sections in blue have restrictions on certain types of vehicles. (Source: Roads Department.)