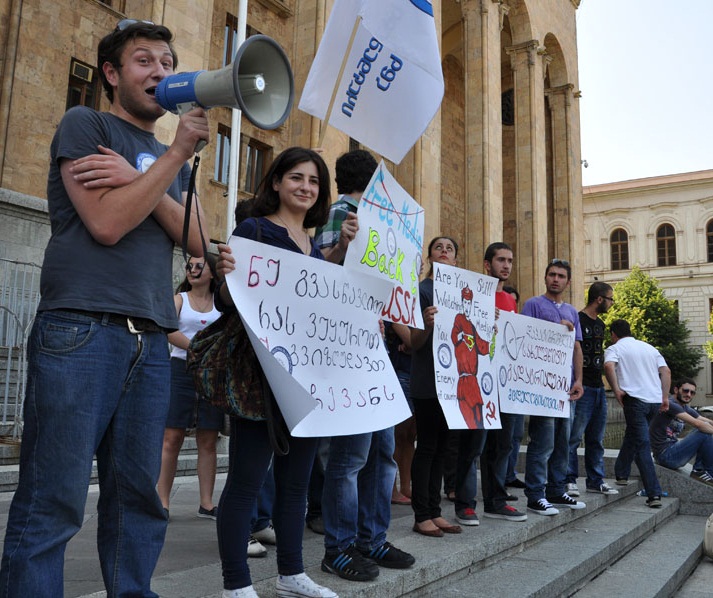 Journalists at Maestro TV protest against the seizure of satellite dishes. The chief prosecutor thinks Maestro was trying to bribe people to vote for the opposition party of billionaire Bidzina Ivanishvili. (Photo: Mari Nikuradze.)

TBILISI, DFWatch – Journalists with Maestro demonstrated in front of the old parliament building in Tbilisi Friday.

Their demand was that authorities return satellite receivers seized from the TV company a few days ago, so journalists be let to continue their work normally.

The Prosecutor’s Office thinks Maestro has a hidden political agenda to support the main opposition party, Georgian Dream, ahead of the parliamentary election in October.

But representatives of Maestro say the plan to hand out the receivers was just a part of a new marketing campaign called ‘Maestro in each Family’, which is a push to increase the number of viewers this summer.

While its staff conducted their brief demonstration, Maestro TV reported that in Lilo market south of Tbilisi, satellite dishes were being taken away from sales counters.

“In this case it is not about specifically Maestro, Channel 9 or Global TV, but the problem is that they want the population not to buy satellite receivers and not to start using them,” he said during Friday’s rally.

The rally started at 15:00. Journalists held up posters, which read ‘give us opportunity to work’. Soon they were joined by a group of youth activists called Voice of Students.

The journalists then read a statement which asked to lift the seizure of dishes, and allow Maestro in each family.

“Citizens have a right to receive information, to listen to different opinion,” the statement says.

Today, the Prosecutor’s Office explained why it had made such a decision.

The statement said their investigation had observed enough evidence that Maestro on orders of Elita Burji, which is a company affiliated with Georgian Dream and its unofficial leader Bidzina Ivanishvili, brought thousands of satellite receivers into Georgia by what in Georgian legal language is called “a hypocritical deal”, for the benefit of Georgian Dream. Maestro representatives think this explanation is vague.

They say Maestro is a TV company, not a political party, and they do not need to bribe voters for anyone.

“According to information from the investigation, in order to cover the real owners of the satellite dishes, Elita Burji Ltd was ready to prepare new labels for satellites and pay several hundred thousand dollars not to reveal data about the real owners (Elita Burji, Global Contact Consulting),” the statement says, going on to note that this plan was only partly implemented, and half of the goods which are the property of Maestro still belongs to Global Contact Consulting.

The Interior Ministry later released a video of satellite dishes with labels.

He reminded people that Global TV’s satellite receivers were also seized and kept together with seized property.

Mamuka Ghlonti also said that if Maestro is fined after the seizure, the company will refuse to pay the fine.

“Let them come and seize our accounts and switch off our television station. Let’s see then how they will conduct elections under equal conditions,” he said.

In addition, representatives of Maestro say they weren’t planning to distribute satellites to the population for free, but to sell them through consumer credit.