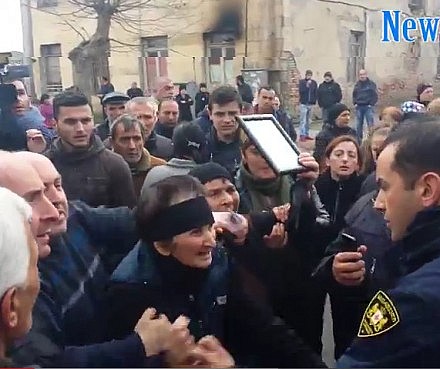 TBILISI, DFWatch–The parents and relatives of a girl who died in a car accident three days ago in Kutaisi accuse the police of covering up what happened. They believe the real culprit is the wife of a policeman.

The family of the victim Nana Giglemiani demonstrated Monday by blocking one of the streets in Georgia’s second largest city.

Kutaisi Today, a local newspaper, quotes members of the victim’s family saying that a woman was driving an SUV down Agmashenebeli Ave when she hit Giglemiani.

Now, the family wants to see video footage of the accident. They suspect that the woman they saw behind the wheel of the SUV is the wife of a policeman and that the police are protecting her.

During the protest, there was a verbal scuffle with the police.

The case is investigated under section 276 of the Criminal Code about violation of traffic rules causing someone’s death.