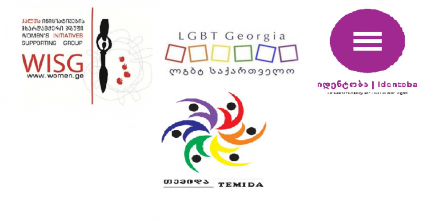 On 27 January, Giorgi Tatishvili, an activist for protecting the rights of sexual minorities, filed the lawsuit with the Constitutional Court in whic

h he demanded removal of article 1106 of the Civil Code, which defines marriage as a union of a man and a woman, as it is against article 36 of the Constitution about marriage.

A coalition of LGBT rights organisations: LGBT Georgia, Women’s Initiatives Support Group, Identoba, and LGBTQI Association — Temida issued a joint statement, in which they distance themselves from Mr Tatishvili’s initiative and call it a provocation doing harm to the community.

According to the statement, the issue of same-sex marriages isn’t currently a priority for Georgia’s LGBT community, as the community continues to suffer persecution and oppression in all areas of life, including social exclusion, discrimination on job market, and physical, psychological, and verbal forms of violence in their daily life.

The statement also says that Giorgi Tatishvili doesn’t represent LGBT community and his notion should be regarded as his private initiative. Due to homophobic attitudes within society, the initiative will attract extremely negative feedback and won’t have a chance to succeed.

‘Giorgi Tatishvili’s statement is provocative and aimed not at protection of LGBT rights, but at causing harm to the community. Based on his provocative statements and actions, we come to a conclusion that the initiative can be connected to specific forces which are interested in using LGBT rights issue as a tool of political and social speculation, controversy, and increasing tension. We suspect that Giorgi Tatishvili’s initiative is backed by pro-Russian political or religious forces, which use anti-LGBT rhetoric and want to create or heighten the sense of threat coming from LGBT community within society’, the statement reads.

Meanwhile, the Patriarchate of the Georgian Orthodox Church has called the Ministry of Internal Affairs to allocate protection to Mr Tatishvili for his notion for legalising same-sex marriage.

According to the Patriarchate’s statement, Giorgi Tatishvili ‘may be in danger due to his initiative’. The statement also reads that ‘the Georgian Orthodox Church is against same-sex marriages’, yet ‘considers use of violence unacceptable’.

The statement made by the coalition of LGBT organisations accuses the Patriarchate of manipulating enemy images in order to intensify the tension and sense of fear in society, which in turn will enable the Georgian Orthodox Church to exercise more power in society in order to maintain strong authority and sources of income.