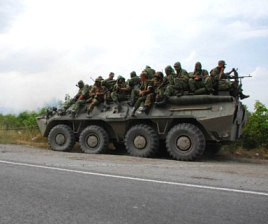 Russian soldiers in the 2008 war. (Interpressnews.)

TBILISI, DFWatch–42 percent of Georgians think Russia is a real and existing threat to Georgia, according to a new survey.

The survey by National Democratic Institute (NDI) shows that 36 percent think Russia is a threat to Georgia, but an exaggerated one.

15 percent say Russia is no threat to Georgia at all.

The results of the latest NDI survey differ from the previous survey in April 2014, when 50 percent thought Russia was a real and existing threat to Georgia, while 32 thought it was exaggerated and 13 said that Russia was not threat at all.

On Monday, NDI published the results of its new poll, which shows that 17 percent are satisfied with the current relationship with Russia, while 73 percent are dissatisfied and rest do not know. The numbers haven’t changed since the last survey in April.

9 percent of those questioned think Georgia will be granted NATO membership within the next four years. 25 percent  think this will happen after 2018, while 17 percent think it will never happen. 48 percent do not know.

79 percent of the questioned were aware that Georgia signed an association agreement with the EU on June 27, 16 percent didn’t know. 69 percent approved of it, 8 percent disapproved, 22 percent do not know and the rest didn’t answer.