Lecture on homophobia disrupted at Free University in Tbilisi

Lecture on homophobia disrupted at Free University in Tbilisi 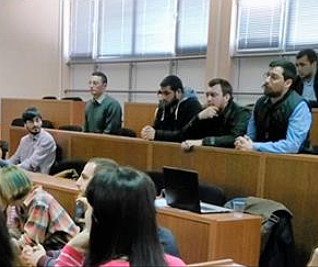 TBILISI, DFWatch–A public lecture about homophobia was called off at the Free University in Tbilisi as result of a protest by a radical religious group that claimed the lecture was propaganda.

Identoba, an organization working to defend the rights of sexual and other minorities, announced the lecture on Facebook. It was supposed to start at 14:00, but about 15 people broke into the hall and didn’t let the lecturer, a professor Tata Tsopurishvili at Ilia University, hold the lecture.

Giorgi Gabedava Sunday informed on Facebook that he and others planned to protest against the lecture by a ‘silent gathering’ as they think that a university is no place to hold lectures about homophobia.

The administration of the Free University explained briefly that the lecture was public and they weren’t able to prohibit anyone from attending and thus they couldn’t prevent what happened.

The lecture had to be called off and the group of extremists left the building.

The topic was ‘cultural aspects of homophobia’ and it was a part of a project financed by the Canadian government dedicated to increasing the awareness of gender and sexuality.

A few weeks ago, Tbilisi State University refused to let Identoba hold an LGBT conference. This was also a result of protests by Gabedava and his supporters.