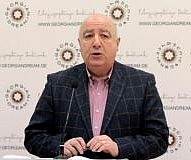 TBILISI, DFWatch–Tedo Japaridze, chairman of the foreign affairs committee in parliament, once more denies the rumor that Condoleezza Rice is to become advisor for the Georgian Prime Minister.

In a new statement, Japaridze sheds some light on what happened during a meeting he had with the former US Secretary of State.

The Russian newspaper Izvestia last week reported that Rice had offered Prime Minister Bidzina Ivanishvili to be his advisor and also quoted Tedo Japaridze, who confirmed this. However, Japaridze denied the rumor when asked by Georgian media and today he released a statement which also denies that Rice made such an offer.

Japaridze writes that during a recent visit to the US with MP Tinatin Khidasheli they met with Condoleezza Rice, a meeting which was also attended by the Georgian Ambassador to the US.

“Neither prior nor after this meeting did the two parties explore the possibility of Ms Rice becoming an adviser to the Georgian Government,” the statement reads. “I hereby unequivocally state that this information conveyed by the Izvestia misrepresents the agenda of the meeting.”

The meeting was held at Stanford University, where they discussed Georgia in a regional context, relations with Russia, future prospective of democratic development of our country and other issues of bilateral interest.

“Ms. Rice reaffirmed that both she, personally, and to her understanding, the US policy community as a whole, are committed to their strategic and amiable relationship with Georgia,” Japaridze notes. “I remain hopeful that hereinafter, such unchecked information will not be disseminated in Georgian or foreign press.”

A spokesperson for Condoleezza Rice also confirmed to Washington Free Beacon  that the information was incorrect.

“Dr. Rice has no relationship, formal or informal, to the Georgian government or any other foreign government for that matter. She regularly sees visiting legislators, ambassadors, and other government officials from all over the world when they are in town but nothing more,” the spokesperson said.