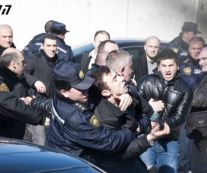 The clashes involved some 200 people of Azerbaijani and Georgian ethnic origin. (Interpressnews.)

TBILISI, DFWatch–Wednesday night there was a street fight in a town south east in Georgia involving hundreds of youth.

The fight took place in Gardabani, a town with a mixed Azerbaijani and Georgian population.

Claims vary about what started the scuffle. Some witnesses say it was ethnically motivated. They say Georgian and Azerbaijani youth began arguing loudly at a tea house in the center of Gardabani last night. The quarrel grew into a street fight involving around 200 people, some carrying batons.

Other witnesses claim the fight was not ethnically, but politically motivated, and was a confrontation between supporters of Georgian Dream and the National Movement.

Ramin Bairamov, head of the UNM office in Gardabani, says when he came to the center of Gardabani at night, many people were gathered in the street, shouting at each other. Police were also present.

He said locals told him that everything started with a conflict among a few youth, some of whom were UNM supporters. They ran and hid in the tea house.

“Afterward, quite many young people attacked the tea house. They broke into it, even attacking a policeman and beating youth who were inside.”

Bairamov says he arrived when the conflict was nearly over. 200 or 300 people were there, he says, with batons and iron tools. There were some injured among the youth.

“I don’t know [from] where so many people gathered so fast and who they were,” he recalls. “This is the fault of the Nationals (UNM members). They were shouting, but I don’t understand, if there was some conflict, what any party has to do with it.”

Bairamov says he thinks there were Georgian Dream supporters among the attackers.

Maviz Zeinabov, head of Georgian Dream branch in Gardabani, says it was an ethnic conflict which he thinks was artificially provoked before the local election, which will be held on June 15.

“We have lived together for 25 years and nothing like this has ever happened,” he said, adding that it is not right to search for political motives. “We live in one country. If some people fought it doesn’t mean that 500 Azerbaijanians fought against Georgians.”

Police tried to defuse the situation in Gardabani at night, but had to get backup from special units.

The Ministry of Internal Affairs launched an investigation pursuant to the criminal code on suspicion of hooliganism.

Azerbaijanis are currently holding a demonstration, accusing Georgians of insulting them during yesterday’s incident. According to a reporter for Interpressnews, they claim that yesterday’s scuffle was not politically motivated, but a confrontation on an ethnic background, as the Georgians were making fun of them.

Gardabani resident Ali Mamedov told DF Watch that the disagreement started on a political issue at first, but turned into a fight, which was followed by ethnic insult. He says he wasn’t present during the fight but knows it from people who were there.

The Ministry of Internal Affairs press office told us no-one has been detained regarding yesterday’s incident.

A while ago, the governor of the region Kvemo Kartli, Giorgi Mghebrishvili, turned up at the demonstration in Gardabani and tried to calm down the situation, but rally participants didn’t want to listen to him.

Another narrative is that the Georgians involved are actually Svans, originally from the northewestern region Svaneti, young men, who became involved in an argument with ethnic Azeris at the tea cafe. The Azeris called their counterparts for help, and the Svans called theirs. As these two groups are mostly aligned to the main political blocs, this turned into a political showdown. Both parties are blaming each other.

Currently, there is relative calm at the scene where it happened.