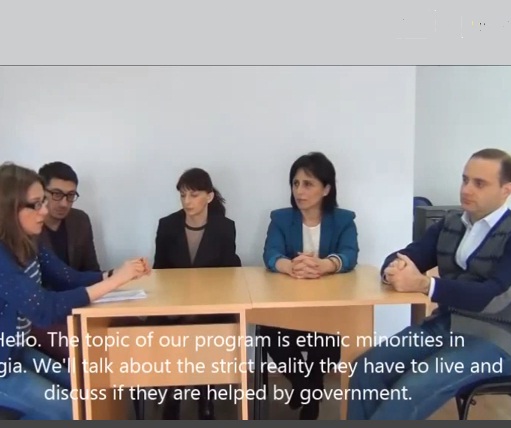 TBILISI, DFWatch–Participants at a round table discussion organized by DF Watch said lack of language skills is preventing ethnic minorities from engaging in politics in Georgia.

The discussion was held on December 28, and the topic was what obstacles there are for ethnic minorities to become active in politics. Our panel spanned representatives of the government, two opposition parties and a non-governmental organization.

Participants were Levan Vepkhvadze, from the Christian Democrats; Manana Nachkebia, from the New Rightists Party; Agit Mirzoev, Director of Analytical Center of Cooperation and Consultations between Ethnicities, and Tina Ghogheliani, Chairman of the Civic Integration Department at the Reintegration Ministry.

Mirzoev highlighted several obstacles to ethnic minorities getting involved in political life and civil activities more generally. He said the biggest problem is the lack of knowledge of Georgian language. Another problem, he said, is that ethnic Georgians are not willing to accept someone who belong to a minority as part of the country.

Representatives of two opposition parties also spoke about the lack of knowledge of the Georgian language. Levan Vepkhvadze from the Christian Democrats said that it is not enough to send Georgian language teachers from Tbilisi to the regions where ethnic minorities are living. He said it would be effective to send specialists who know both languages, but the teachers which are sent from Tbilisi do not know the minority languages.

Two regions in Georgia have sizable ethnic minorities of its neighboring countries: Samtskhe Javakheti, which is in south west of the country and borders with Armenia, and in Kvemo Kartli, in the south of Georgia, where Azeri are living. In addition, there are the Svani and Megrelians, who are considered ethnic Georgians but speak distinct languages with thousands of years of history which until now have remained without formalized written form.

Vepkhvadze said that the government doesn’t have a strategy where there will be ways to solve the problem of lack of knowledge of Georgian language among minorities who number more than half a million.

Manana Nachkebia from the New Rightists Party said that ethnic minorities do not have a motivation to engage in civic activism and the government has tended to use then for its own interests. The opposition didn’t have the means and interest to cooperate with minorities. She said when there was a change of government in 2012, this problem disappeared. She expressed hope that opposition parties will be given the opportunity to have close contact with minorities and show more interest for their situation.

Ghogheliani from the Reintegration Ministry said that it is priority for the new government to solve the problems minorities experience and they are work on plans to do so. She expressed hope that a new policy will be correctly implemented and will bring positive results.