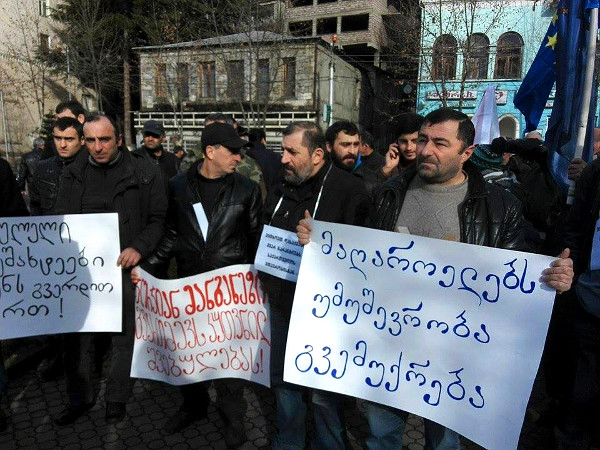 TBILISI, DFWatch–Mine workers in Chiatura, a town in western Georgia, are protesting against a decision by their employer, Georgian Manganese, to halt mining work for four months due to failing demand.

The workers have been temporarily laid off for a four-month period with 60 percent pay. Thursday, they showed up at the management office of the company in the center of Chiatura, demanding that the government starts paying attention to their problem.

About three hundred workers are protesting, and according to Tamaz Dolaberidze, who heads the mining and metallurgy trade union, workers at the Rustavi smelter plant Azoti, the glass plant of Ksani, Zestaponi’s ferro alloy plant and the coal miners in Tkibuli, all expressed their solidarity with the workers in Chiatura. Some even showed up there to join the protest.

NGO representatives and students also participated in the rally.

Their main demand is that the government must cover 40 percent of their salaries until the mining work is resumed in Chiatura.