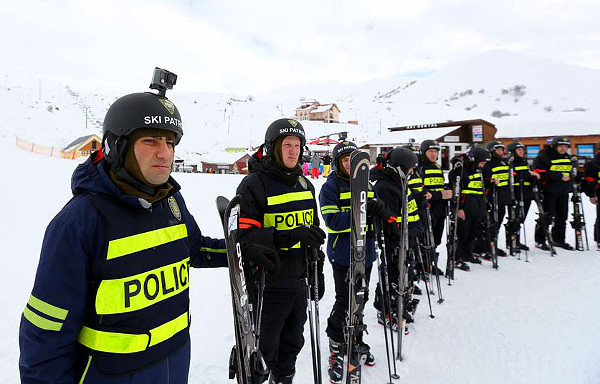 According to the Ministry of Internal Affairs (MIA), the ski patrol will observe people who are skiing at winter resorts and make sure they are following the rules.

The policemen on skis will pay attention to special marks on skiing slopes and other signs. If a skier appears to be dangerous to himself or herself, or to others, the officer will remove the individual from the slope.

The ski patrol is also responsible for spotting people who may be inebriated or under the influence of psychotropic drugs, and bar them from further skiing.

Vehicles like snowmobiles will not be allowed in the ski slopes, except for rescue crews.

The ski patrol will also protect areas where school children are being trained.

“[Ski patrol] will provide security for our and your children while skiing in the slopes, and I want to underline that the success of this project is dependent on the cooperation of each of you,” the minister said.

For additional security, the MIA sent 14 patrol inspectors with special equipment to Gudauri to provide maximum security in the slopes.

There have been several accidents this year at winter resorts. A few weeks ago, a 12 year old girl died after an 18 year old man crashed into her while skiing.