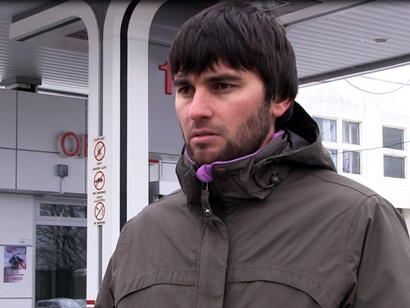 The incident allegedly happened on the night of 23 January and was recorded by a petrol station’s security cameras and confirmed by the station’s employees, website Kakheti Information Centre reported.

According to the victim’s report, 24-years-old resident of the village of Omalo in Pankisi valley, Aslan Tsutsashvili and his father were stopped by police at a petrol station in Akhmeta under suspicion of not having their seatbelts fastened.

Telavi District Court fined each of the both men GEL250 (€93) for disobedience towards the law enforcement, allegedly without viewing the recording from the petrol station’s monitoring and discarding the men’s report of assault.

Mr Tsutsashvili asked the Pankisi office of NGO Centre for Civic Activities for assistance, following which a formal complaint was filed at the General Inspection of the Ministry of Internal Affairs and the Public Defender’s Office. An investigation led by the General Inspection is currently under way, in which Mr Tsutsashvili is represented by a lawyer provided by NGO Human Rights Centre.

The incident provoked another report of Pankisi–police tension which goes back to the events of August 2013. At the time, following a row between Kist youth and Georgian youth from the village of Matani, Pankisi’s Council of Elders and local police forces engaged in mediation of the conflict.

According to representative of the Chechen diaspora in Georgia, Meka Khangoshvili, a high-ranking police officer harassed representatives of the Council of Elders and the local Salafi community by saying ‘If you don’t behave, we’ll throw you out from the valley’ during a meeting in Kakheti police headquarters.

The Public Defender’s Office issued a statement condemning ethnically-motivated violence and calling for an impartial investigation.

‘The Public Defender condemns any form of violence, especially when it is committed by state agencies, the primary duty of which is to protect citizens from violence. At the same time, the Public Defender expresses concern that the violence was allegedly motivated by the citizens’ ethnic origin, which contains signs of hate crime.

‘The Public Defender reminds law enforcement agencies that the state clearly expressed its policy with regard to the hate crime, when it imposed responsibility for the crime and introduced a special definition. Accordingly, if the crime is committed by a representative of law enforcement agencies, the state is responsible to prove that this policy is not just a paper. The state must use law so that even slightest suspicion of selective justice is not left.

‘The Public Defender also calls on the Chief Prosecutor’s Office to conduct a timely and impartial investigation into the case. If the state shares Western values ​​and strives for European integration, it is obliged to pursue strict policy against any form of violence on grounds of ethnic hatred.

‘Authorities should be intolerant with regard to the mentioned or other forms of racism, since similar facts can serve as an encouraging factor for ethnic tensions, minority oppression and racism’, the statement reads.