Khidasheli: No link between arms deals and Russian troops’ activities

Khidasheli: No link between arms deals and Russian troops’ activities 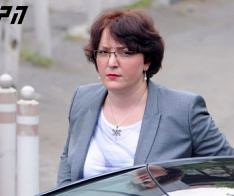 Tbilisi, DFWatch – There are no direct links between signing of arms deals with western manufacturers and recent activities of the Russian troops in South Ossetia, Defense Minister Tina Khidasheli says.

“Any activity undertaken by the Georgian state in order to protect and strengthen its statehood will inevitably been met by the negative reciprocal steps by Russia.

“However, it doesn’t mean we should lose heart and give up…” responded Tina Khidasheli to Imedi TV’s question whether recent steps by Russian troops to push the border inside the Georgian-controlled territory was a reciprocation of recent deals signed by her with major western arms firms.

No details of the agreements have been released, except the general information that they would strengthen Georgia’s anti-aircraft and anti-missile capabilities, a long-standing Achilles’ heel of the country’s armed forces.

“We’ve been undertaking such kind of steps that the previous (Saakashvili) government did not dare ever to undertake. When Georgia strives to strengthen its statehood and the country’s defense capabilities, of course, it doesn’t make the Kremlin excited. However, it won’t make us to stop.

“Therefore, we will do everything, deliberately, step by step, very calmly and without emotion, to strengthen the fundament of the Georgian state,” Tina Khidasheli said.