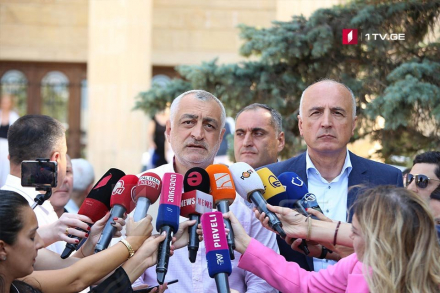 TBILISI, DFWatch–Tbilisi city court on Friday released the two founders of Georgia’s largest bank against a 700,000 lari bail each. The two were also barred from leaving the country without notifying  investigators.

The defendants, Mamuka Khazaradze and Badri Japaridze, said they will step down from their managerial positions at Anaklia Development Consortium (ADC) in order to minimize the harm caused by the ongoing investigation.

The charges against them deal with money laundering amounting to nearly USD 17 million, in a case dating back as far as 2008. Prosecutors claim the TBC Bank moguls used a sophisticated scheme to pocket the sizable amount.

They also serve as CEO and deputy CEO of Anaklia Development Consortium, respectively. ADC is charged with constructing a deep water port on Georgia’s Black Sea coast in the vicinity of the village of Anaklia, a project worth USD 2,5 billion and seen as strategically important for Georgia and its partners.

Khazaradze and Japaridze pleaded not guilty and claimed that the real reason behind their prosecution is to hamper the construction of a new deep water port in Anaklia, which is in “Russia’s interest”. After the hearing, the defendants took a combative stance as they addressed the media, outlining their view of the case, that it is a result of deep-rooted corruption. Khazaradze told the court that the country is in a “quagmire” and is being ruled by “one person”.

“We are in a situation where the country is being ruled by a single person without institutions. You know who this is, he is the conductor and the performers are very bad … I promise you that the fight will go on till the end. I will continue this struggle with my friends to eliminate this quagmire. It will end, they will go home, the system will be destroyed very soon,” Mamuka Khazaradze said surrounded by dozens of reporters in the lobby of the court building.

The money laundering charges against Khazaradze and Japaridze date back to 2008, when according to the Prosecutor’s Office, the two top management of TBC Bank used a sophisticated scheme to pocket nearly USD 17 mill.

If found guilty, the two may face up to 12 years in jail.

Khazaradze says that recent activities by the Prosecutor’s Office have caused a billion lari’s worth of damage for Georgian companies only the last two days.

On Wednesday, during a single day, when the two managers were indicted, TBC stocks slumped by 12%, costing investors USD 130 million, he said.