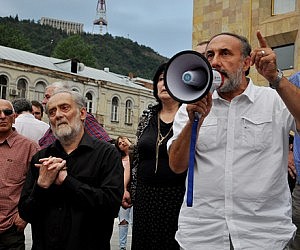 From an anti-KaZantip demonstration in Tbilisi in 2014. (DF Watch.)

TBILISI, DFWatch–The manager of KaZantip has called Georgians ‘ridiculous, poor and wild’ people after learning that someone demolished a sculpture built by the music festival’s organizers in Anaklia last summer.

KaZantip is an electronic music festival which used to be held in Crimea, but relocated to Georgia in 2014 after the Russian annexation. It was seen as a failure because only about 8,000 people attended, compared to the usual 50,000.

Some groups were against holding KaZantip in Georgia, mostly religious radicals, who organized demonstrations and called it improper and filthy. Despite protests, the festival took place in Anaklia, but not many people came. In addition to the low number of visitors, many complained that drinks and food were too expensive.

This year KaZantip was first meant to be held in Cambodia in February, but it was cancelled after authorities refused to give permission. It was then decided to hold it in Crimea, but under a different name.

On Tuesday, Nikita Marshunok, “President” of KaZantip, informed that a sculpture of the “republic” was being removed from Anaklia.

“It is even more surprising that they didn’t destroy everything we had built there, but only this sculpture,” he wrote on Facebook.

“Of course, the rest of the infrastructure can be used to offer their services, but better to demolish the sculpture so that no-one guessed who built it all.”