Kars-Akhalkalaki will not be halted

Kars-Akhalkalaki will not be halted 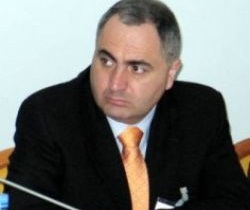 TBILISI, DFWatch — Construction of the Kars-Akhalkalaki railway will continue as before.

Irakli Kovzanadze, Chair of Georgia’s Partnership Foundation, said this in Azerbaijan on Wednesday, during a visit there by Prime Minister Bidzina Ivanishvili and other Georgian officials.

The issue of the new railway line came to the fore after Ivanishvili talked about it in an interview with DF Watch published December 21. He said the project has big geopolitical importance, but also noted that there are certain questions in economic regard. He remarked that the new government respects the interests of its neighbor countries, as well as obligations taken on by the previous government. Hence, the project will be completed. But he also noted that Georgia’s interests should be reflected in such projects and the new government will work towards this end.

Karsi-Akhalkalaki railway will connect Turkey and Azerbaijan through Georgia, thereby posing an alternative route for cargo than through the ports Batumi and Poti.

The president and TV supportive of him interpreted the PM’s remarks as if the new government has decided to suspend the construction of the railway, which would affect Georgia’s relations with its western partners.

On Monday, the Prime Minister revisited the topic in a press conference and explained his views.

His position is that the construction of the new railway should not affect the old railway.

“When the new railway starts operating, cargo load will be five million in the first stage. It should be regulated so that the old railway isn’t affected because of the [opening of the] new railway. This will take some coordination,” the PM said on Monday, adding that this could be regulated on the basis of negotiations with Azerbaijan.

There has still not been any official comments about whether the parties discussed this issue during Ivanishvili’s visit to Azerbaijan. Kovzanadze told journalists that the project is very important for both countries and will be a strategic object.

Giorgi Kvirikashvili, Georgia’s Economy Minister, says that the new railway will only be positive for country’s economy.

“This is about a very large strategic project, which is one of the most important ways to implement our transit potential. We think there is a big trend of increasing freight of goods, and this railway will have only positive influence on Georgia’s economy,” he added.