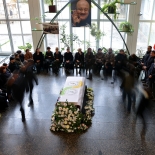 Bendukidze died in London recently. A public funeral service was held earlier on Saturday at one of the universities which he founded.

The service was attended by the parliament speaker, other members of parliament, the U.S. ambassador and a few other diplomats, the wife of ex-President Saakashvili, students, friends and other people who wanted to express their condolences to the family.

U.S. Ambassador Richard Norland said that Bendukidze’s heritage will live on through the very successful Free University and the Agricultural University, which were both founded by him.

Also MPs from the Georgian Dream coalition and the Free Democrats attended the funeral.

“Even though I didn’t know Kakha Bendukidze personally, I thought it was right to come to the funeral,” MP Shalva Shavgulidze said.

Sandra Roelofs read a letter from her husband, ex-President Mikheil Saakashvili, which said that a few days ago Bendukidze came down from London to Brussels to see him.

“He had a lot of plans. In the near future, he was going to be appointed as economy minister in Ukraine. In the most difficult time, Ukrainians were to entrust him the most responsible work, to a person officially persecuted and hated from homeland,” the letter read.

Saakashvili’s letter further said that Bendukidze has never gone anywhere, but remains in the university and students of this university and his reforms which are world famous.

Kakha Bendukidze died in London on November 13 at the age of 58. The cause of death is said to have been heart failure, but this is not yet officially confirmed. An autopsy was conducted in London and the results will be published in six weeks.