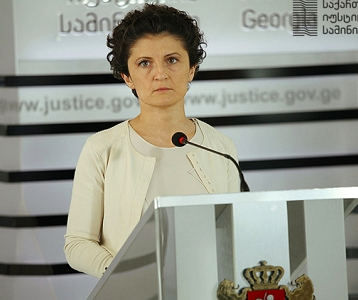 TBILISI, DFWatch–The Justice Ministry in Georgia has introduced a package of legislative amendments to prevent violence against women.

The amendments apply to about 20 different sections of laws and will target illegal spying, communication by phone or by other electronic means, which is systematic and contains threat against a woman or members of her family. It also targets forced sterilization.

One example is a section in the Criminal Code which will make it a punishable crime to engage in illegal spying or other communication, which may lead to up to two years in jail.

The amendments prohibit forcing someone to get an abortion or be sterilized. In addition, the amendments will target not only domestic violence against women, but also violence outside of the family home. Today, a victim of domestic violence will get free legal consultation and 30 days off from work while spending time in a shelter, but with the new changes she will have those possibilities also if she is subjected to violence outside of her home.

A person charged with violence against women will be prohibited from carrying a weapon if he owns one or carry a service arm. If the perpetrator is subject to warnings or restraining orders, the weapon will be taken from him.

The government launched a campaign against domestic violence after an increase in number of women victims of violence. In 2014 alone, 33 women were murdered, according to Ministry of Internal Affairs.