Flooded areas of Tbilisi are being disinfected

Flooded areas of Tbilisi are being disinfected 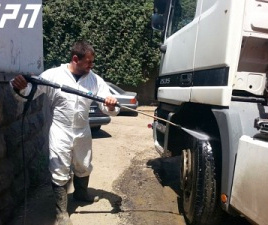 TBILISI, DFWatch–The Health Ministry in Georgia has sent teams to disinfect five areas that were hit by a disastrous flood in Tbilisi on June 14 to prevent the spread of disease.

Puddles of water may provide a hotbed for various disease causing agents, he explained, and these sites are now being disinfected. Meanwhile, the clean-up work has been halted to not expose workers to risk.

“Since the temperature has been high the last few days and there is a great amount of water in those areas, there is a risk that bacterial or parasitic infections may develop,” he said, adding that all the risk zones will be disinfected today.

Some clean-up work is allowed to continue. Heavy machinery is being used inside what remains of Tbilisi Zoo, with each vehicle being disinfected as it enters and leaves.

Meanwhile, the Security and Crisis Management Council stated that volunteers will be replaced by employees of different government bodies.

Deputy head of the council said that days after the disaster, puddles are everywhere, there are dead animals in certain places, the temperature is high and there still is some possibility that diseases will spread.

“Yesterday, several volunteers had health issues due to the heat, while some had light injuries. The Health Ministry recommended to reduce the risks to zero and specially trained and armed employees of government bodies will replace the volunteers,” he said, adding that volunteers may cooperate with the Red Cross which will coordinate the aid to affected families.

The Health Ministry has recommended that volunteers get vaccinated against tetanus, which is free for everyone.

19 people died in the June 14 flood, while three are still missing. Tens of people were left without houses, the zoo and a new highway from Heroes Square to Saburtalo pass have been almost entirely destroyed. A large dog shelter with at least 400 dogs was also destroyed. Up to 300 dogs and ten bears perished.