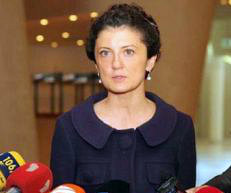 Tsulukiani recently withdrew from the Georgian Dream coalition due to political crisis following the sacking of Alasania last week.

She was a member of the Free Democrats before, but had her membership status suspended when being appointed as minister. On Monday she said that she will remain in the government to work for the country’s Euro Atlantic integration.

“Today I will appeal to my friend, to the dearest person for me, Irakli Alasania of the Free Democrats, and I will leave the party,” she said, wishing the party success. “I made a decision which in today’s context I think is the most correct decision, in favor of a European Georgia.”

She said she is confident that it’s the right choice to work for Georgia’s Euro Atlantic course with the prime minister and other ministers.

As a former member of the Free Democrats, some had expected Tsulukiani to resign like the foreign minister and the minister for European integration, also Free Democrats member, but she said she plans to remain in government and restore her status as Free Democrats member after she is no longer minister. A day before, Maia Panjikidze criticized her for this decision.