Journalist’s home shot at in Tbilisi

Journalist’s home shot at in Tbilisi 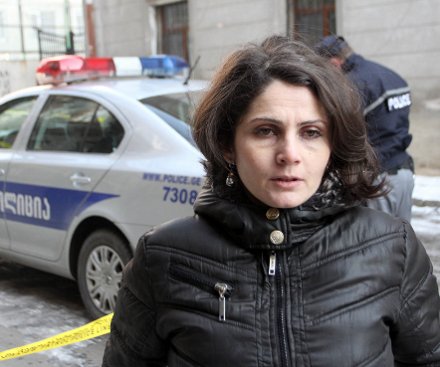 Khatuna Paichadze says she believes the attack was related to her work at weekly newspaper Kviris Palitra, where she has been writing sharp investigative reports for the last two weeks. Kviris Palitra has been at odds with Georgian authorities over the last year over their coverage of the police action May 26 last year and is currently subject to a vaguely defined audit by tax authorities. (Photo: Interpressnews.)

TBILISI, DFWatch – A shot was fired at a journalist’s house in the Georgian capital Monday. No-one was injured.

The journalist Khatuna Paichadze was at work when the shot rang out at around 14:00 local time. The bullet broke a window in her first floor flat in an Italian yard in the center of the city. Her husband and son were at home and called her to tell what had happened.

The weekly newspaper Kviris Palitra, Paichadze’s place of work, is a popular and independent paper which during the last year has been at odds with Georgian authorities over their coverage of a violent police dispersal of a peaceful protest May 26 last year.

Paichadze says she has no personal enemies, and puts the shooting in connection with her work. Over the last two weeks she has been publishing sharp investigative reports in the paper.

According to the news agency Interpressnews, the police examined the scene this afternoon and they believe the shot came from a hunting rifle. One empty cartridge was found on the ground.