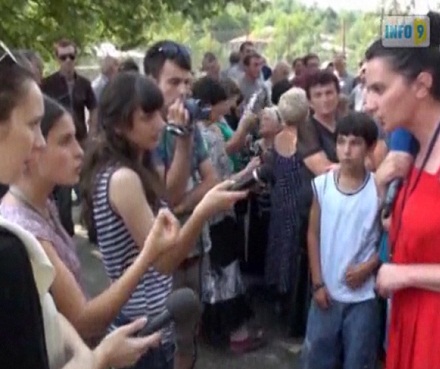 Stalkers are continuing to interrupt the work of journalists, despite the existence of laws that could be used if authorities wanted to intervene. (info9)

TBILISI, DFWatch – For more than a month, journalists with an opposition-leaning news service in Georgia have been followed around by a group of unknown people while trying to do their work.

The stalkers carry cameras and microphones, but do not appear to have an actual journalistic assignment, but instead encircle info9’s reporters with their equipment while asking pointless questions seemed intended to interrupt the reporter’s work.

Info9 has a website with news and online television and brings stories from dozens of reporters around the country. Also subject to the stalkers’ unwanted attention are journalists working for the TV station Channel 9. Both of these outlets are affiliated with the largest opposition bloc, Georgian Dream, headed by the billionaire Bidzina Ivanishvili.

The phenomenon has resulted in the stalkers sometimes appearing in the background of info9 and Channel 9’s reports.

The groups following journalists around ask questions like why they work for that media outlet, does Bidzina Ivanishvili finance them, and what their salary is. When asked questions back, they refuse to answer, just saying that their goal is to find out more about journalists who work for Channel 9 and info 9.

As reported earlier by DF Watch, there were attempts to find out who these people are, and who they represent. Some of their footage has occurred on Real TV and online television iTV, both considered to be pro-government. But both media outlets avoid answering questions about how the stalkers’ footage ended up being aired by their channel.

Some say they represent Real TV and have seen them holding a microphone with this TV station’s logo. Some present themselves as ‘media group.’ Malkhaz Basilaia, a former journalist at TV company Mze, who also attempted to interrupt the work of info9 journalists, said that his goal of following info9 journalists around is to expose them as an extended arm of the Georgian Dream coalition.

Basilaia was awarded the Medal of Honor by President Mikheil Saakashvili. He now owns a media organization in the Samegrelo region.

Lawyers consider the stalkers phenomenon a trend and not isolated cases. Georgian law prohibits the interruption or restriction of journalists work. But none of these people have been arrested yet.

Following journalists is not the only problems that journalists have had to face here lately. There were a number of incidents where journalists were beaten, had their equipment taken away and material deleted. One incident in the village Karaleti led to someone being punished for beating a journalist.

But whole number of cases and investigations are launched, but not finished or finished without punishments.

Inter-agency commission on Free and Fair Elections yesterday appealed to people who interrupt journalists, avoid such actions, because it creates danger to provoke violence before elections.

Some journalists are also restricted to cover meetings and events organized by government officials, as they are thrown out from the buildings and told to watch material prepared by other journalists, which are let to attend the meetings.

“Naturally, journalists from different editorial policy, have right to ask critical questions to candidates conducting political campaign, but it is completely different from attempts to disrupt those meetings,” commission writes, “on the other hand, journalists have right to ask questions to their colleagues and critically rate their affiliation with some political force or their views, but it shouldn’t become sabotage of journalist activity.”

The most recent case of interruption took place yesterday in Chiatura. MP Davit Darchiashvili held a meeting with the population. Info 9 was trying to report about the meeting, but the so-called media-group arrived there too, interrupting the journalist’s work. Part of those at the meeting had no interest in listening to Darchiashvili, but preferred to watch the duel between the info9 journalist and the unknown media group.