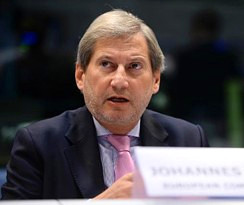 Hahn, the commissioner for European neighbourhood policy and accession negotiations, expressed support for Schengen visa waiver for Georgia in June, saying that all formal requirements had been met and that Georgia deserved a quick decision from EU authorities about the visa liberalisation.

In May, Hahn said he hoped that Georgians, Ukrainians, and Kosovars would be able to travel without visas to the EU in 2016 ‘because they had done their work’.