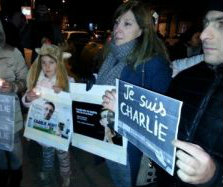 Victims of the Paris terror comemmorated in Tbilisi. (Interpress

“Freedom of speech and the press are supreme values that must be duly protected everywhere and at all times,” Irakli Garibashvili stated before flying to the global peace rally in Paris.

These are the words of the man who was the head of the Ministry of Internal Affairs in the fall 2013, during which time a proposal was made to amend Georgia’s civil code by introducing a new article on blasphemy.

Just to remind you, the MIA envisioned fines of 300-1,500 GEL and up to 15 days in prison for those who insult sensibilities of believers or desecrate religious symbols or institutions. Thankfully, the amendment was never passed.

It’s unclear how involved Garibashvili was in drafting this amendment. However, as the head of the ministry at that time, he most probably knew about this proposition. Because if he didn’t, it would cast a long shadow of doubt on his leadership skills.

Of course, Georgia is a better place for a free speech than neighboring Turkey or Russia. But it is far from perfect. Freedom House gave it 47 points (mediocre at best) on a scale of 0-100, with 0 representing absolute freedom of the press. Another major organization, Reporters Without Borders, ranked Georgia 84th out of 180 world countries in its own World Press Freedom Index.

The Charlie Hebdo publication poked fun at various religions, not only Islam. And apparently now the government of Georgia supports their right to do it. But would something like that be imaginable in Georgia?

From my first days in this country I knew that religion is very touchy topic, and almost everyone gets very offended when they hear a word or two of criticism directed against the Georgian Orthodox Church. Five years later, I have noticed the church’s increased omnipotence, as it’s long arm reaches further into Georgian politics and the every-day life of Georgian civil society. Today, there is no need for the MIA’s amendment on blasphemy, as every media outlet self-censors and is conscious of not being overly critical of the Patriarch and the Orthodox Church.

For example, in 2013 25 million laris from the state budget was allocated to the Georgian Patriarchate. Unsurprisingly, the church has absolutely no obligation to document to the state (or the tax payers for that matter) how this money is allocated, and if it was put to good use. This lack of fiscal accountability would cause a huge media uproar in most Western countries. But here the media reported it in the most neutral way possible.

No one wants to land on the wrong side of the fence.

Just a couple of days before the Paris massacre, Irakli Vacharadze, a stalwart in Georgia’s LGBT community, received yet another series of death threats. Why? Because he dared to criticize the Patriarch. A human rights activist posting in his public Facebook profile astutely pointed out that the Patriarch’s Christmas epiphany carried anti-abortion and anti-equality messages.

His comment was then quickly shared by pro-Russian media, and Vacharadze began to receive threats of murder, assault, torture and rape. They came from religious figures, as well as from Neo-Nazi supporters. There were some gestures of support to protect Irakli’s freedom of speech, but no massive public solidarity.

This is why I will not use #jesuischarlie, because I don’t want to be in the same crowd with hypocrites, who support freedom of speech as long as it is outside of their own yard. And I will not use #jesuisahmed, because I know that no one will risk their lives to defend my right to be blasphemous against their beliefs. I will use #jesuisgeorge, because for as long as I live in Georgia I will openly talk about free speech, but will keep my opinion about the Church to myself.