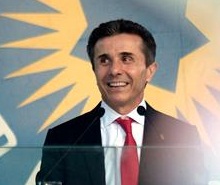 Bidzina Ivanishvili vowed to not let the USD 45 million fine stop him in a speech Sunday. (Georgian Dream photo.)

Tbilisi City Court issued the fine in a lawsuit raised by the Chamber of Control’s party finance audit agency. Originally, the fine was 149 million lari, but the Appeals Court reduced it to half.

Ivanishvili has said he will not pay the fine. Now, the Chamber of Control is expected to appeal to the court for what is called an execution document, after which the Executive Bureau will get involved.

The executive bureau then will have five days to inform Ivanishvili it has started an executive process.

“Then Bidzina Ivanishvili should still be given another seven day term to pay the fine. Then the Executor will decide which way take about the above mentioned money,” says Shalva Tadumadze, a lawyer working for Ivanishivli.

At a rally in Ozurgeti Sunday, Ivanishvili said the government cannot stop him with fines.