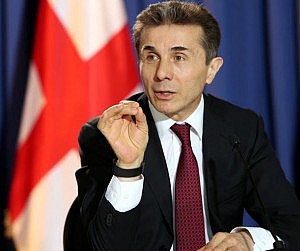 TBILISI, DFWatch–The Georgian prime minister says Europe has unrealistic expectations about the two political blocs in his country drawing a line over the past.

Prime Minister Bidzina Ivanishvili said Europe expects the former and current governments to start everything with a blank sheet of paper, as they try to run the country together in a precarious power-sharing arrangement.

The situation often referred to as ‘cohabitation’ arose after Ivanishvili’s Georgian Dream coalition won the parliamentary election in October, 2012, and formed a government, while the National Movement party still holds the presidency until Mikheil Saakashvili resigns in the end of this year.

But in Georgia, people expect to see justice restored, Ivanishvili said, speaking at a press conference with regional media.

Under such conditions, it is impossible to be in complete cohabitation with the previous government, he said.

When asked about the failed negotiations about constitutional amendments, the PM said that if the amendments fail to be passed in parliament, it will be beneficial for his Georgian Dream coalition, because the National Movement, as the opponent party, will ‘destroy itself’.

However, the PM is sure that amendments will gain more votes then is necessary to have them passed.

“In a week the draft will be presented to parliament and this way the game will completely move to the National Movement’s field and their votes will bring them benefits or will bring harm,” he said.

Ivanishvili said he is sure that President Mikheil Saakashvili won’t dare to dismiss the government.

“He will get smile as all of Georgia will die of laughter,” he said. “I assure you that if Saakashvili uses this right, he will be excluded from the European party. This topic will get on top in Europe and the US and he will lose his image.”

But the prime minister warned that said that if Saakashvili really attempts to dismiss the government, laughter will quickly turn to rage.

“I assure you that laughter won’t be enough for Georgians and then it may be followed by rage, which is understandable,” he said, once again adding that he is sure the constitutional amendments will be passed, but if they fail, the UNM will get ‘maximum defeat’.

In its current version, the constitution allows the president to dismiss the government and also dissolve parliament, but only six months before or after a national election. The Georgian Dream coalition wants to reduce the powers of the president and has proposed a set of constitutional amendments, but lacks the required number of seats in parliament to pass them on its own. The two power blocs have been in negotiations over the amendments for the last few months, but no clear consensus has been achieved yet.