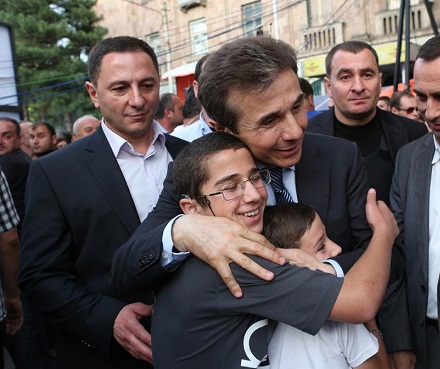 Bidzina Ivanishvili promised to reopen a market on the border with the breakaway region South Ossetia, in order to normalize relations. (GD.)

TBILISI, DFWatch – The main opposition bloc in Georgia mobilized 15 000 people Sunday in Gori, the town closest to the capital which was occupied by Russia in the 2008 war.

Georgian Dream front man Bidzina Ivanishvili promised to normalize relations with Russia and reopen a market on the border with breakaway South Ossetia which used to be an important point of contact for the population.

Ergneti market was closed in 2004 as part of the new Saakashvili government’s push to do away with smuggling.

Ivanishvili said that closing this market was a mistake, because for eight years this was a common market where Georgians and Ossetians could meet. Now there is a Russian military check point.

People had come from the villages Ergneti and Meghvrekisi to hear the speech, and according to Interpressnews people had problems getting there by road because the main roads were closed, for unknown reasons.

The rally started at 19:00, and people had arrived from all over the area which immediately surrounds the disputed region of South Ossetia; the location of the outbreak of war in 2008.

Ivanishvili promised those who managed to get there that within the frames of law his party will reopen Ergneti market. Ergneti is a village where there for years was a customs point and a market where people traded with products imported from Russia, some of it illegal contraband.

As has become his routine at campaign events, Ivanishvili named his party’s single mandate candidates for parliament from this region.

In his speech, Ivanishvili said that if his party wins, their position towards Russia will be correct, but principled.

He says NATO and Euro integration is their strategic choice, and that there is not alternative.

“However, despite everything, we will have to normalize relations with Russia. I think in case we come into government, we will be able to get Georgian products back on the Russian market,” he said adding that they will find a common language with people in the two breakaway regions Abkhazia and South Ossetia.