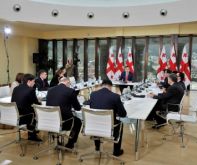 TBILISI, DFWatch–Georgia’s prime minister has refused to participate in a session of the country’s National Security Council.

In a written statement the PM and the speaker of parliament write that they believe attending the session will be like ‘participation in a masquerade’. They believe attending it will cause the ‘further discrediting’ of the council and demonstrate an unserious attitude toward serious state issues like the creeping occupation and the security of citizens.

The statements was a response to Andro Barnovi, head of the president’s administration, who said at a briefing on Wednesday that the president has sent the government a request to call a session of the Security Council.

Barnovi explains that the president thinks it is important to call the Security Council session in order to discuss the recent events.

“You know that the creeping occupation continues. The president believes that immediate discussion about this issue is important. The president therefore requests that the Security Council gathers on Saturday, and if feasible, agree on the time,” he explained.

Under Georgian law, the Security Council is subordinate to the president. The prime minister, speaker of parliament and ministers of law enforcement bodies are automatically members, but the president may also invite other ministers or other officials to session meetings.

President Saakashvili and the government represent the two main political blocs in Georgia. They have frequently had problems doing things together, and there has been much speculation around the holding of Security Council sessions this year.

Calling together the Security Council is the right of the president, and he could do so without any else requesting it, but this time asked the government and received a refusal.

The PM’s press office says the government is working on discussing creeping occupation and the Sochi Olympics, both inside the country and abroad, and thus, they don’t see any importance in holding the session.

The press office claims it is a ‘PR campaign’ by the president which the PM is not participating in. The speaker of parliament also rejected the president’s request.

Giorgi Margvelashvili, presidential candidate for the Georgian Dream coalition, thinks that holding a Security Council session now won’t bring any positive results. He told journalists that now it is important to complete the election process peacefully, at a time of tension in the country.