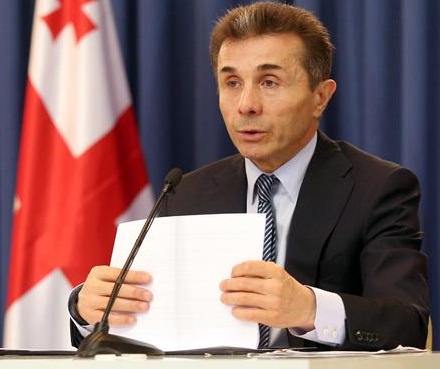 TBILISI, DFWatch — Prime Minister Bidzina Ivanishvili says the National Movement is attempting to win over Defense Minister Irakli Alasania to their side.

He says he heard rumors that some of the UNM members have contact with him, but when he asked Alasania about it, he denied that he had communicated with the former government.

At the end of January, a decree issued by Ivanishvili was made public. It meant that he demoted Defense Minister Irakli Alasania from his post as vice prime minister.

The prime minister later said on Channel 1 that he did it because there had been a discussion within Alasania’s Free Democrats party about making him a candidate for president without agreeing with Ivanishvili, and the point of demoting Alasania was to end the speculation and give him more time to do his work as a Defense Minister.

At a press conference Tuesday, the PM said that he thinks Education Minister Giorgi Margvelashvili can replace Alasania as vice prime minister, but he has not yet told it to other coalition members.

“I think he will be a good vice prime minister,” he said, adding that there is no ‘bad minister’ in his government, so no changes are planned for the cabinet.

Bidzina Ivanishvili said it is too early to talk about a coalition candidate for president yet, but he also noted that Irakli Alasania does not fit ‘the standard of president.’

He repeated what he has said last year, that Vakhtang Khmaladze, chair of parliament’s Judiciary Committee, might be a candidate for president. He said he thinks Khmaladze will fit well into the new role of the presidential office.

“The institute which is today and which will be changed in the future is different in principle. Khmaladze is a standard for this. In terms of the new institution, the president has a role of facilitator in case of crisis,” he said.

The PM said that despite what he said, everyone has a right to do anything, but they have to follow the rules. If coalition members do not share the ideas of one of its members, the latter can leave the coalition and participate in a ballot.