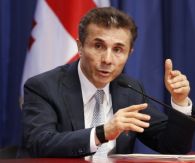 TBILISI, DFWatch–Prime Minister Bidzina Ivanishvili Friday delivered his address to voters two days before the presidential elections, saying that in the last twenty years, this is the first time people have a chance to change their president through election.

The candidate who wins on Sunday will become Georgia’s fourth president since independence in 1991. It is the sixth presidential election Georgia holds.

Zviad Gamsakhurdia won the first presidential election on May 26, 1991, but he was overthrown in a putsch in December 1991. The conspirators called on Eduard Shevardnadze to become chairman of the body they had set up – the State Council. For a few years, the country was without both a president and a constitution.

In 1995, parliament adopted a new constitution. It was prepared by a commission created by Shevardnadze. After it was passed, there was held a presidential election the same year which he won. In 2000, he became president for the second time.

After fraud in the parliamentary election on November 2, 2003, and as a result of public outrage, an opposition headed by Mikheil Saakashvili, Zurab Zhvania and Nino Burjanadze led to a bloodless coup called the Rose Revolution, which resulted in Shevardnadze’s resignation on November 23.

January 4, 2004, Saakashvili was elected president, receiving 96 percent of the votes. He resigned in November 2007 after a violent dispersal of a protest rally in Tbilisi and announced a snap election, which he won with 53.5 percent. Although pointing out major flaws, international observers overall gave the election their stamp of approval. The opposition claimed the election had been falsified and launched a wave of protests.

Prime Minister Bidzina Ivanishvili, who formed most of the opposition for 2012’s parliamentary election and defeated Saakashvili’s party, the National Movement, now calls on people to turn up and vote, as Georgia has to make another important step on Sunday.

“We came peacefully to this election and this is a victory for the people and the country,” he said in the address.

The PM continued saying that the government took the responsibility to conduct a free, transparent, democratic election in line with European standards, and observed by local and international organizations, which unanimously admit that the election campaign was conducted in a peaceful and free environment, he added.

Ivanishvili called on people, including Georgians who live abroad, to come on Election Day and vote for their candidate.

“October 27, we will conduct a free and democratic election and I am sure no-one will doubt its results,” he said.

“I believe you will be active and come to the election with belief that you vote for your welfare and the strength of Georgia.”