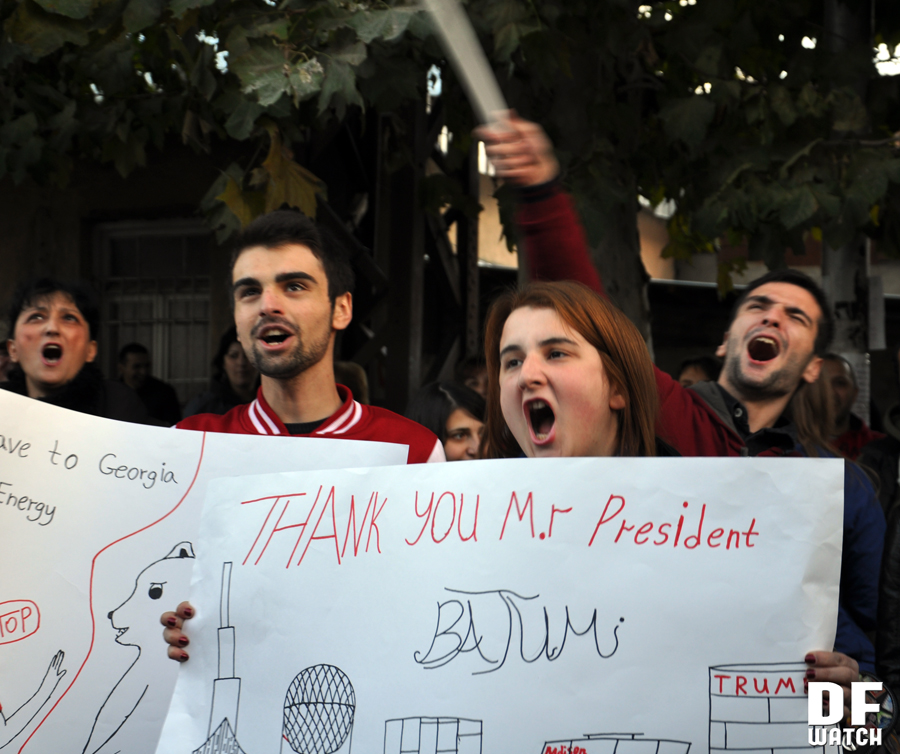 Outside the president’s residence in Avlabari, Tbilisi. (DF Watch.)

TBILISI, DFWatch–A movement called Patriots held a small rally on Friday to say goodbye to President Mikheil Saakashvili and thank him for his nine years of service.

A few tens of people came carrying posters and flags outside Saakashvili’s official residence in Avlabari, Tbilisi. Some of the posters showed the refurbished Batumi city on the Black Sea, others bore words of thanks.

One of the participant brought a U.S. flag and explained that this is a symbol of Saakashvili choosing the correct foreign policy course.

Participants sang the national anthem, which was changed after the Rose Revolution in 2003, which brought Saakashvili and his party to power, together with the Georgian flag. They shouted ‘Misha, goodbye and thank you’ through a megaphone.

Participants noted that they are not saying goodbye forever, as they expect him to come back.

“Those are fools who cannot see what he has done, how much he has achieved as president and how much he had to bear while on the post,” one of the participants said.

“We had a democracy before 2012, you have dictatorship in 2013 in the 21st Century in Georgia, think about it,” the organizer of the rally said in his address, words directed at supporters of the new government. “we call him Misha, and we call Bidzina – Batoni (Mister) Bidzina.”

Khatia Buniatashvili, a well known pianist, also showed up at the rally. People greeted her with applause and took pictures next to her.

“I want to say in the name of everyone that I think our president is a genius,” she said.

During the rally, someone waved a Georgian flag from the president’s administration and the crowd responded with applause.

The rally lasted half an hour.