Ivanishvili plans to build new hotel on the border with Abkhazia

Ivanishvili plans to build new hotel on the border with Abkhazia 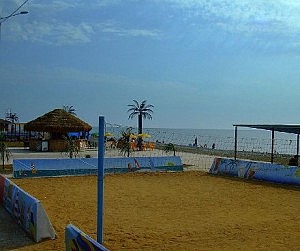 Ganmukhuri is symbolic because it lies on the “Abkhaz” side of the border river Inguri.

TBILISI, DFWatch–Former Prime Minister Bidzina Ivanishvili has revealed a plan to build a luxury hotel in western Georgia on the border with the breakaway region Abkhazia.

He told journalists on Friday that he also has some other plans which he will disclose when they are approved.

“I plan to build a high class hotel in a place where there is a ‘conditional border’,” the businessman said.

Ivanishvili said that everything is moving at a ‘great pace’ within the new government, unlike their predecessors.

“Today I am building, but the National Movement almost manage to turn the word ‘build’ into a negative word.”

The plan is to build a hotel in Ganmukhuri, a beach resort on Black Sea coast next to Abkhazia, a self-proclaimed republic that broke loose from Georgia in the early 1990s and which Russia took control over following the 2008 war.

Ganmukhuri was used as a venue for fiery rhetoric by former President Saakashvili, who opened a patriot camp there for youth. Former Tbilisi Mayor Gigi Ugulava called Ganmukhuri ‘the beginning of the way to Abkhazia’.  The coastal resort is special in that although on Georgian-controlled territory, it is on the right, or “Abkhaz”, side of the border river Inguri.

Ivanishvili also announced that he wants to meet with people in different regions of Georgia ahead of the election for parliament October 8.

“I think of organizing two meetings a week, on Mondays and on Thursdays, in order to manage [to hold] meetings in all ten regions,” he said, adding that the meetings will begin on September 1.

“I guess I will have to make one or two TV speeches in Tbilisi as well and meet with people.”

Ivanishvili created the Georgian Dream coalition which won the last parliamentary election in 2012. He served as prime minister for about a year and then resigned, but is believed to still play an important role in the government’s decision-making process.