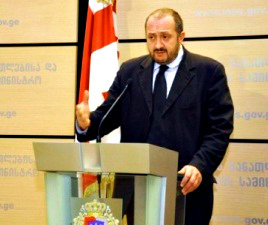 Giorgi Margvelashvili looks likely to become Georgia’s next president, if the latest poll is correct. (Interpressnews.)

TBILISI, DFWatch–The Georgian Dream coalition has chosen Minister of Education Giorgi Margvelashvili as its candidate for president in the upcoming election.

“Giorgi Margvelashvili has all good skills to be a president,” Prime Minister Bidzina Ivanishvili said at a briefing Saturday.

He added that the coalition is united behind Marvelashvili.

“This is the best and ideal option.”

The PM remarked that Margvelashvili has good management skills and political experience and also is a good expert and analyst.

The announcement came after a session of the coalition’s political council.

Margvelashvili is a former rector of Georgian Institute of Public Affairs, a US-run training academy for mainly journalists and PR professionals.

Members of the coalition said after today’s consultations that the discussion ended without any major disagreements.

Prison Minister Sozar Subari said that everyone likes the new candidate and all agreed to present him as a candidate for president.

Georgia is to hold election for president in October, 2013.