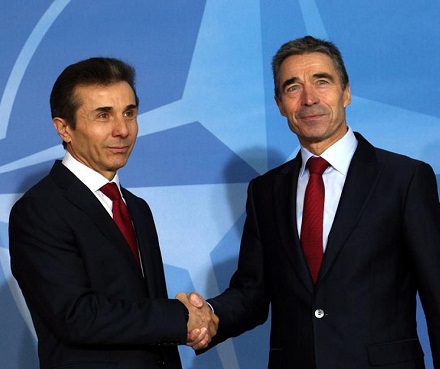 After the meeting, they held a joint press conference. Fogh Rasmussen said they had a positive and constructive conversation, and underlined that Georgia is a close and committed partner for NATO.

The Secretary General spoke about the importance of the election on October 1.

“I encourage all parties in Georgia to keep consensus on Georgia’s Euro-Atlantic polices and work together to pursue the necessary reforms and meet the highest democratic standards,” he said.

The Secretary General remarked that NATO is committed to Georgia’s Euro-Atlantic future and Georgia’s territorial integrity and sovereignty.

“But membership will take more work and more reforms and it will take constructive cooperation between all branches of government.”

The elections were free and fair, and lived up to democratic standards, he said.

“I encourage each party in Georgia to keep up that momentum and consolidate democratic progress. That includes full respect for the rule of law, the constitution and democratic standards. But the true test of a democracy is the ability of the different actors to work together for the good of the country.”

Anders Fogh Rasmussen said he also met with President Mikheil Saakashvili. He urges both president and prime minister to cooperate and make cohabitation work in full respect for the constitution.

Yesterday, the Secretary General expressed concern about the detention of political and military officials in Georgia, for which the new government has been criticized. At the press conference he was once again asked about current events in the country.

Secretary General said he and the prime minister had discussed this issue.

“I am concerned if these trials are perceived to be politically motivated, that would be damaging for the image of the country and the government, even if it is not true. That’s my concern,” he said. “This is the reason why it is most important to stress that such trials must take place in accordance with the basic principles of rule of law, ensure full transparency.”

Anders Fogh Rasmussen underlined that NATO is not going to interfere with ongoing trials.

“We have confidence that they will be conducted without political interference and live up to the fundamental principles of rule of law.”

He said it may be damaging if prosecutions and trials are perceived to be politically motivated.

Bidzina Ivanishvili offered to Secretary General to set up additional mechanism so that NATO can follow those processes in the country, but he turned the offer down, as the PM assured him of his clear commitment to the rule of law and also there is a NATO-Georgian commission in the country and a special representative, who is in constant dialogue with Georgian officials.

Bidzina Ivanishvli said at the press conference that at the meeting both expressed concern about current events in Georgia, meaning the detentions.

Bidzina Ivanishvili noted that the Georgian delegation is also concerned about the postponement of visit by NATO’s military committee to Tbilisi, but he said the Secretary General assured this visit will take place.

“The Secretary General promised there will be made efforts in December at meeting of NATO ministers that Georgia passed the test and progress which Georgia has achieved will also be noted.”

The prime minister promised that the new government will do everything to have appropriate military forces to NATO and will help in building real democratic institutions.