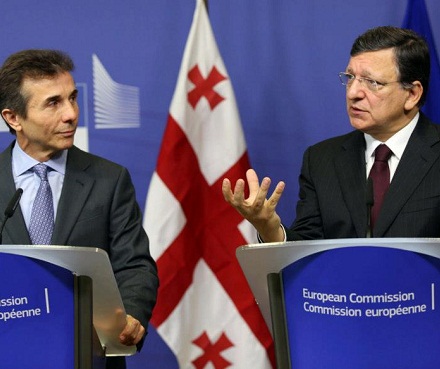 José Manuel Barroso congratulated him on being appointed as prime minister and underlined the importance of his first visit to Brussels.

He said at briefing after the meeting that the conversation was very fruitful, as they shared common views and ways of deepening the cooperation, which is a common goal for Georgia and the EU to achieve.

“Georgia is a key member of our Eastern Partnership and the European Union is keen in bringing the country closer to the European Union,” José Manuel Barroso said. “I praise both Prime Minister Ivanishvili and President Saakashvili for the way in which they steered the transition to the new government. I take this occasion to urge all political actors in Georgia to continue using their leadership and statesmanship to maintain a constructive and responsible political atmosphere. I believe this is in the interest of Georgia and all Georgians.”

Ivanishili said after the meeting that Euro-integration is the main priority for the new government, which will do everything to accelerate and deepen this process.

“We analyzed dynamics and defined goals to soon develop our relations,” he said adding, that he promised that Georgia will do everything to manage and fulfill goals and instructions defined by the Eastern Partnership action plan before the 2013 summit.

The prime minister said Georgia’s main goal now is signing an association agreement before the summit.

“We should also manage to sign a deep and comprehensive free trade agreement with Europe; also to start review on visa-free rules,” the PM said, adding that in December, Georgia will host EU Commissioner Cecilia Malmström, who will present a plan regarding visa free travel.

Ivanishvli said he assured Barroso that the new government will do everything to defend human rights in Georgia and have strong democratic institutions.

President of the European Commission said that several chapters in Association Agreement negotiations are already finished.

“We are making real progress in the Deep and Comprehensive Free Trade Area negotiations – and we hope that the pace of trade reforms in the country will allow us to finalize these negotiations in time for the 2013 Eastern Partnership Summit, in Vilnius, Lithuania. We are also moving forward in our visa liberalization dialogue, which is another of the key features of our relations.”

Barosso said: “The elections in Georgia were successfully held, and they were recognized as free and fair elections. But as we all know democracy goes beyond the Election Day. It is also the day after, and the upholding of democratic principles and rule of law on a daily basis. This is an indispensable condition for democracy. Democracy is about the rule of majority but also about the respect of minorities. Democracy is more than elections, it’s the culture of political relations in a democratic environment.”

“In this respect, situations of ‘selective justice’ should be avoided has they could harm the country’s image abroad and weaken rule of law. I have addressed this issue with the Prime Minister and he responded to me in a very concrete way,” Barroso said.