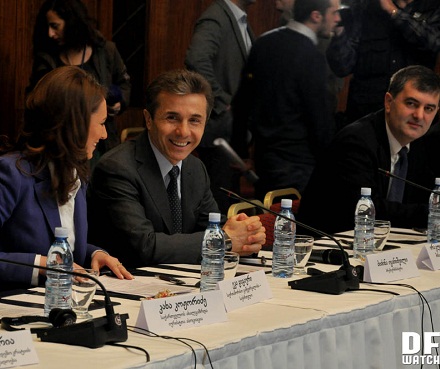 TBILISI, DFWatch–Non-governmental organizations (NGOs) in Georgia met for a conference on Monday to sum up the three months after the parliamentary election of Georgia.

Representatives of NGOs working in the human rights field described the government’s first 100 days in terms of what actions and measures the Georgian Dream coalition have taken after it came to power.

The speakers discussed the process of transferring power, as well as adopting the law on amnesty, creating the list of political prisoners, trials of former government officials, problems in staffing in the public services after the election, the situation in the media and the latest violent incidents at the National Library. They also gave recommendations to the government members who attended the meeting.

The NGO representatives underlined that there are questions regarding the detention of the former governor Tengiz Gunava, as well as questioning of a well-known jazz pianist and his brother Gochiashvilis, who claimed they were pressured during interrogation.

“Investigations of former government officials was followed by negative feedback,” Kakha Kozhoridze, chairman of Georgian Young Lawyer’s Association (GYLA), said during the presentation, adding that it is still impossible to evaluate how politically motivated the detentions are, until the cases have been studied well.

The organizations are concerned about people being fired in the public sector, as well as the appointment of unqualified staff and signs of nepotism.

Kozhoridze said that the process of giving prisoners status as political prisoners went too fast, which led to shortcomings, but enforcing the law on amnesty was just a consequence of the situation which the Saakashvili government had created.

Prime Minister Bidzina Ivanishvili, who also attended today’s meeting, said he also had questions regarding the law on amnesty, but he is sure that the majority of the prisoners who have been released were serving time because of mistakes made by the justice system.

Ivanishvili said the process maybe wasn’t ideal, but a large-scale amnesty still should be implemented.

The non-governmental organizations also highlighted the long lasting demonstrations outside local government offices and the many town trustees (gamgebelis) and their deputies who have been replaced in the regions. The next local election is in 2014, but the demonstrators want the UNM members who were elected during previous local elections to be replaced.

The prime minister responded that the local governments ‘trouble him a lot’.

“I today learned that 47 gamgebelis have been replaced. My position was not to engage and to leave former employees in their posts,” he said, “but then I became sure that it would cause a worse situation.”

The prime minister said he thought of a possible reasons for the tension between local government and the population and said he assumes that the most interesting reason is that local governments haven’t been independent for a long time. But, he added, now it is important to avoid confrontations and to prepare a draft of reform regarding local government, which is already finished and soon will be ready for a public hearing.

“I do not plan to criticize the former government. I plan to answer critical remarks, but I want to remind you that it is impossible to solve many issues within the complicated legacy from the previous government.”

While responding to the reforms in the justice system of Georgia, Justice Minister Tea Tsulukiani said that both the Interior and Justice Ministries are on a same position that administrative detentions cannot be abolished, because there is being planned an extensive reform of drug policy.

The justice minister also talked about changes in the labor code, as the report by the NGOs included this topic. She described problems in the labor field in Georgia. She said a bill is prepared together with trade unions and employees.

“The labor code should be built on compromises which partly suits both the employer and the employee,” she said.

Also present at the meeting were the interior minister, prison minister, chief prosecutor, members of parliament from the governing Georgian Dream coalition and the National Movement, which is out of government, but has the president, as well as diplomats and representatives of international organizations.

The conference was organized by Transparency International Georgia, Georgian Young Lawyer’s Association and International Society for Fair Elections and Democracy, with the support of the Swedish International Development Cooperation Agency.