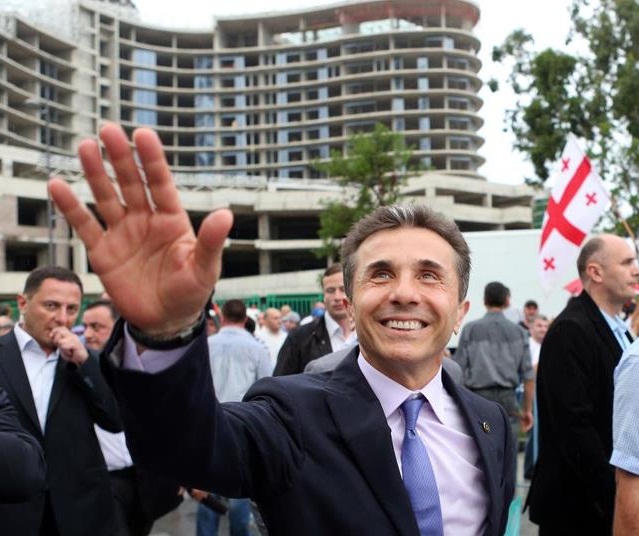 TBILISI, DFWatch – The opposition Georgian Dream coalition Sunday continued showing off its support with a massive rally in Batumi, a port on the Black Sea coast.

About 20 000 people gathered in front of the stage. ‘Let Saakashvili see how many of us are here’, Bidzina Ivanishvili, leader of the coalition said.

He drew attention to Saturday’s incident when there was a scuffle between supporters of the National Movement and Georgian Dream. President Mikheil Saakashvili visited the village Beshumi in the Adjara region, in which Batumi is the administrative center, at the same time as Ivanishvili had planned to meet the population. The situation ended with him leaving without being able to address the crowd.

“When Saakashvili learned that we were there he stopped showing off and ran away like a rabbit. He ran away in his helicopter,” Ivanishvili told the crowd which stayed despite of the rain.

He also underlined that he doesn’t have any kind of nostalgia towards the Soviet Union and has no plans to bring Russian forces to Georgia.

In an interview on Kavkazia TV about one month ago, the businessman said: “Georgians should try together to create a good life in Georgia, an interesting life in the country, when sometime if you remember during Soviet times it was in Georgia, we should create a life like that in the country.”

Today he said he is accused of following a Soviet ideology.

“Sakashvili’s National Movement is like a mirror to its preceding Soviet government. My success was caused by the fact that the Soviet Union collapsed.”

He also said that only Saakashvili could say in public just like Soviet government that he doesn’t plan to leave.

This was a reference to Saakashvili’s recent statement in Beshumi, when he said that the ruling party does not plan to transfer control over a country they have built to others to destroy.

“No one will ever get this place back to the darkness, in criminal without perspective, in corruption and slavery,” Saakashvili said.

But Ivanishvili instead raised the specter of elite corruption, which many accuse Saakashvili of having let develop, and promised to free the country from it.

“We will end the Soviet epoch in Georgia, the epoch of lies, of elite corruption, injustice and unscrupulousness.”

The Georgian Dream leader said he was also accused by the government of wanting to bring Russian forces into Georgia, but he said that Saakashvili himself brought the Russian army to Georgia due to his unreasonable policy and the proof of this is the occupied territories and hundreds of lost villages.

Coalition leader announced about the next rally, which this time will be held on August 18 in Rustavi, town 20 km away from Tbilisi.