Ivanishvili denies rumor that Rice offered him to be advisor

Ivanishvili denies rumor that Rice offered him to be advisor 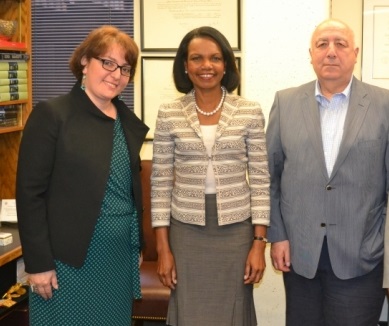 TBILISI, DFWatch–Tedo Japaridze, who chairs the foreign affairs committee in parliament, denies rumors that former US Secretary of State Condoleezza Rice will be appointed as official advisor to the Georgian prime minister.

A few days ago, the Russian newspaper Izvestia reported that Rice had offered her assistance to the Georgian Dream coalition.

Prime Minister Bidzina Ivanishvili on Thursday told journalists that he would be pleased if a politician like Condoleezza Rice should become his advisor, but he said he just learned about the idea and was told that it is not true that Rice has made such an offer.

“I would be pleased if she would become my advisor; I would welcome this and thank her, but I was told this information is not correct,” he said.

Izvestia quotes Tedo Japaridze saying that ‘Rice has promised to support and advise in the direction of regional security, relations with Russia.’

However Japaridze, who recently visited the US and met with Condoleezza Rice as part of his visit, told DF Watch that they didn’t discuss this issue.

“The former Secretary of State will not have any official status and of course this information is not true. But she is observing the processes in Georgia with great interest and she remains an active supporter of our country,” the he said.