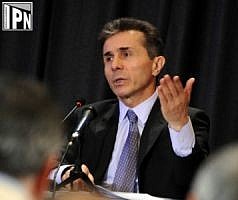 TBILISI, DFWatch — Georgia’s Prime Minister Bidzina Ivanishvili says the reason he removed Defense Minister Irakli Alasania from his post as vice prime minister was to end speculation in Alasania’s party about making him a candidate for president.

The prime minister Wednesday issued a decree which suspended Irakli Alasania from his post as vice prime minister. He is still defense minister. Before this decision Alasania said on Channel 1 that he had had an awkward conversation with the prime minister about who should be Georgian Dream’s candidate for president in the election in October, 2013.

It was expected that Alasania would become the coalition’s candidate, but when Ivanishvili presented his new government, he said he would be happy to see Vakhtang Khmaladze, chair of parliament’s judiciary committee, in this post.

Afterward, Alasania said that parties that make up the coalition may name their own individual candidates in addition to the coalition’s candidate, and in his party there has been a discussion about strengthening the powers of the president again.

With the new constitution which was passed in 2010 ans comes into force in 2013, the country moves to a parliamentary model, with will increase the power of the prime minister, while reducing those of the president, making the office play more of a ceremonial role.

Wednesday, Ivanishvili said Alasania made ‘a small mistake’ when he started a discussion in his own party about the candidate for president without agreeing with the prime minister first.

The PM said the coalition has decided to strengthen the regional offices of Georgian Dream – Democratic Georgia and he explained in the coalition council that he would be the chairman of the party.

“I explained to them that I would come back to be chairman of the party and explained all these would be moderate and other parties won’t lose charm. In this regard, Alasania made a small mistake to review this topic in his party and took this information out,” the PM said, adding that this has caused rumors to spread in the regions that everything has already been decided in the party and that Alasania will be candidate for president.

Ivanishvili said dismissing Alasania as vice prime minister serves to avoid such rumors, and will also be good for Alasania, in that it ends speculation and lets him concentrate more on running the defense ministry.

The PM said he hasn’t yet thought of who will replace Irakli Alasania, but he said he will still have the same relations with the defense minister as they used to have and he remains a member of his ‘team’.

The PM said they have talked about this issue a few times and he understood his decision well.