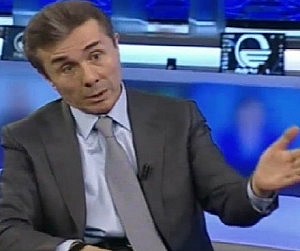 TBILISI, DFWatch–Former Georgian Prime Minister Bidzina Ivanishvili criticizes the party of ex-President Saakashvili, the National Movement, of encouraging youth to volunteer for the war in Ukraine.

“[Mikheil] Saakashvili and others who wish to see Georgians going to Ukraine and die should first ask their own children to go,” Ivanishvili said in an interview with Imedi TV Wednesday evening.

He said if Ukraine needs any assistance, this should be decided on a national level, like in the case of Georgia’s participation in the NATO-led mission in Afghanistan.

The ‘Georgian Legion’ on Kiev’s side in the war is seen as mostly a National Movement effort. It was recently visited by Giorgi Baramidze, who was Euro-integration minister during Saakashvili. Two of the volunteers have lost their lives so far.

One Georgian has also died fighting on the side of the separatists.

“The calls by the National Movement, which tries to urge Georgian youth [to go] there and make them fight in Ukraine are not correct,” Ivanishvili said, and added that it is bad that Georgians have died in Ukraine fighting to help Georgia’s friends.

After the death of the first volunteer, Alexandre Grigolashvili, was reported on December 19, the Georgian Defense Ministry issued a short statement calling on citizens not to go to Ukraine to fight.

The statement said that responsibility lie with former government officials who have called on Georgians to go and fight outside the state. The ministry also advised people ‘not to fall for this provocation.’

Although these views are shared by some in Georgia, the timing of such a statement – right after the death of a soldier – was universally criticized, and the statement was quickly removed from the Internet. The defense minister explained that he had not approved it, and its publication was due to a technical problem.

In the ensuing debate, in which ex-President Mikheil Saakashvili accused the Georgian Dream government of being ‘pro-Russian’, the National Movement defended its involvement in Ukraine’s war by arguing that Ukraine supported Georgia during the war with Russia in 2008 and that some Ukrainian soldiers even fought in this war, so Georgians should have a right to go and fight for Ukraine now if they want to.

Ivanishvili said on Tuesday that Saakashvili is calling on Georgians to go and fight in Ukraine. He said Georgia has a ‘really small role’ in the events in Ukraine.

“We are a small state and we must manage to acknowledge our role, find our place in the most difficult situations. Can you imagine what would have happened in Georgia if the National Movement was in power today?”