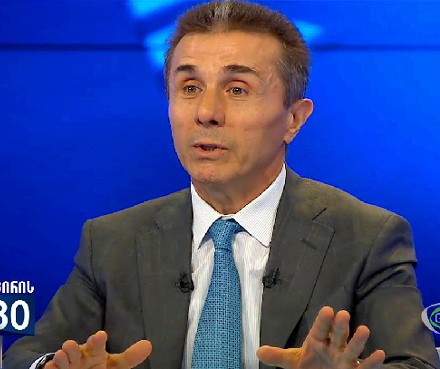 The program was first broadcast a few weeks ago. Ivanishvili has since used it as a platform for airing his views about current events in the country.

This Sunday, Ivanishvili commented on President Giorgi Margvelashvili’s refusal to sign the list of candidates for the new government, sent by Prime Minister Irakli Garibashvili. Instead of signing. Margvelashvili postponed it for one week, the only opportunity to oppose the appointments he has under the Constitution.

Again, Ivanishvili criticized the president for colliding with his own political bloc. He said this makes Margvelashvili ‘unique.’

“We have an unprecedented president,” Ivanishvili said on Sunday “The world probably doesn’t remember a person coming to force with a team confronting the same team on the other day.”

Advertising the next show, he announced that he will criticize Marvelashvili’s decision to start using the Avlabari residence as his office. Disagreement over whether to use the lush residence – a symbol of Saakashvili’s presidency – led to a split between president and government about a year ago.

Also a handful of NGOs were targets of Ivanishvili’s criticism yesterday. He said that they are ‘circulating lies’ and that this is their ‘profession.’ The ex-PM accused them of serving the interests of the former ruling party, the National Movement.